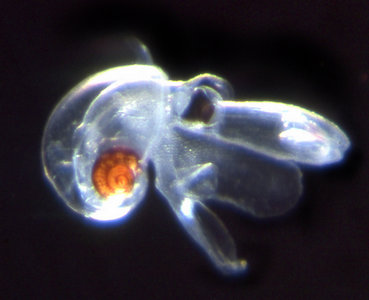 Protatlanta souleyeti is a small species (<2 mm shell diameter) that is distinguished from all other atlantids by its calcareous shell and glass-like, cartilaginous keel, composed of conchiolin. The truncated keel extends from the shell aperture to about one-half of the shell's circumference in adult animals. The shell spire consists of three whorls and is slightly elevated and rounded, with incised sutures. In all P. souleyeti from the world oceans the shell spire lacks surface sculpture, although in the Atlantic Ocean there is a second form that has a low spiral ridge centered on the second whorl and extends to the third whorl, and a lower and shorter secondary spiral ridge inside the first one. The eyes lack a transverse slit in the distal pigmented tissue (type a, Richter, 1961), and the operculm has a large apical gyre (macro-oligogyre; type a, Richter, 1961). Geograpic distribution is cosmopolitan at tropical to subtropical latitudes.

Page: Tree of Life Protatlanta souleyeti (Smith 1888). Authored by Roger R. Seapy. The TEXT of this page is licensed under the Creative Commons Attribution License - Version 3.0. Note that images and other media featured on this page are each governed by their own license, and they may or may not be available for reuse. Click on an image or a media link to access the media data window, which provides the relevant licensing information. For the general terms and conditions of ToL material reuse and redistribution, please see the Tree of Life Copyright Policies.