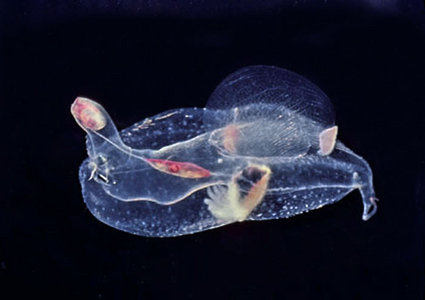 Pterosoma is a monotypic genus represented by the Indo-Pacific species P. planum. The transparent trunk, with whitish minute dish-shaped inclusions and surface tubercles, is expanded as an oblong disk that is flattened dorso-ventrally. The trunk terminates in a tapering tail. The visceral nucleus arises from a short, mobile stalk and is covered by a flattened shell.  The shell is divided medially into two lateral halves by a low carina, homologous with the keel in Carinaria. The carina runs the length of the shell, beginning at the posterior end abutting the protoconch. While swimming, the visceral nucleus is raised dorsally, exposing the gills to inflowing water, but if disturbed it is retracted into a longitudinal groove on the surface of the trunk. The proboscis is moderately short, extending ventrally beneath the anterior margin of the trunk.

In the book on holoplanktonic gastropod snails by Lalli and Gilmer (1989:32), the in-situ field observations of swimming Pterosoma planum by Gilmer were described: "Pterosoma has large opalescent spots covering the central body in both sexes; these spots continually change in brilliance and pattern as the animals swim."  While the "central body" undoubtedly refers to the trunk, the nature of the "opalescent spots" is unclear since the only structures clearly visible on the trunk surface in net-captured specimens (Seapy, pers. obs.) are the surface tubercles described above under 1.b.  Conceivably, the "opalescent spots" and the behavior observed by Gilmer may be limited to animals in-situ. Despite observing active and apparently healthy specimens swimming freely in aquaria aboard ship for extended periods of time (Seapy, pers. obs.), the observations of Gilmer were never seen.

Page: Tree of Life Pterosoma Lesson 1827. Pterosoma planum Lesson 1827. Authored by Roger R. Seapy. The TEXT of this page is licensed under the Creative Commons Attribution License - Version 3.0. Note that images and other media featured on this page are each governed by their own license, and they may or may not be available for reuse. Click on an image or a media link to access the media data window, which provides the relevant licensing information. For the general terms and conditions of ToL material reuse and redistribution, please see the Tree of Life Copyright Policies.