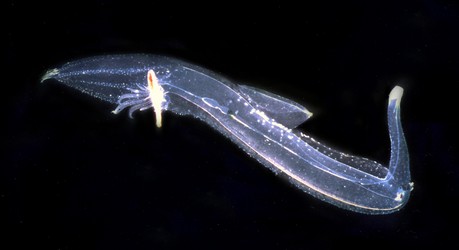 All pterotracheids lack a shell as adults, although they possess one as larvae (the shell is shed at metamorphosis). Their bodies are elongate and basically cylindrical, consisting of a proboscis, trunk and tail. The maximal recorded body length is 33 cm. The head lacks tentacles anterior to the eyes, except in male Firoloida. The viscera are compacted into a fusiform visceral nucleus. The swimming fin is large, located about midway between the anterior and posterior ends of the trunk, and bears a sucker only in males (presumably used in mating). Pterotracheids are mostly epipelagic (dwelling in the upper several hundred meters of the water column), although the vertical ranges of two species of Pterotrachea extend into the mesopelagic. Nocturnal vertical migration is seen in Pterotrachea.

The Pterotracheidae are widely regarded as the most highly derived of the heteropod families. Features supporting this contention include: (1) enlargement, elongation and narrowing (to a  basically cylindrical shape) of the body in the anterior-posterior axis, resulting in a streamlined body with enhanced swimming abilities, (2) shedding of the larval shell at metamorphosis, with the result that buoyancy problems are reduced since a calcareous shell (present in the adults of the other two families) is lacking, (3) compaction of the viscera into a pyriform visceral nucleus, which is largely enveloped by the gelatinous body at the posterior end of the trunk.

Two genera are included in the Pterotracheidae, one of which, Firoloida, is monotypic. The genera can be distinguished by the following characters: