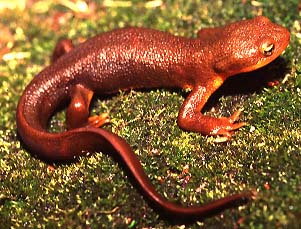 Phylogenetic relationships of extant salamandrid genera are from Titus and Larson (1995). For more information on extinct genera, see Estes (1981) and Duellman and Trueb (1986).

Salamanders of the family Salamandridae are informally subdivided into two major subgroups, the "true salamanders" (includes genera Chioglossa, Mertensiella and Salamandra) and the newts (includes all remaining extant genera). Both groups have aquatic larvae except for some viviparous true salamanders (Mertensiella luschani, Salamandra atra and Salamandra salamandra bernardezi) that give birth to fully metamorphosed offspring. Metamorphosed adults of the true salamanders are highly terrestrial whereas those of newts are at least partly aquatic and some are entirely aquatic. Some newts of the North American genus Notophthalmus have a particularly complex life cycle with two metamorphoses and three distinct developmental stages: an aquatic larva, a terrestrial juvenile (the "red eft") and a secondarily aquatic adult.

The family Salamandridae is primarily European and Asian in its distribution. The true salamanders are almost entirely European in distribution, except for some peripheral populations of the widespread and highly variable species, Salamandra salamandra, located in the Middle East (Israel, Lebanon and Syria) and northwest Africa (northern Algeria and Morocco). Habitats favored by the true salamanders include burrows and refuges located under logs or stones in moist woodlands and subalpine meadows. The true salamanders are generally secretive and are active on the surface only on mild, damp nights.

The newts are more widespread in distribution, covering most of Europe and including species located in southeastern China and Vietnam, the Middle East, northwestern Africa and North America. All newts have aquatic larvae and some, such as members of the Chinese genus Pachytriton, are strictly aquatic also as adults. Other newts are largely terrestrial as adults, but all must return to ponds or streams to reproduce.

For a detailed review of the biology, reproduction and diversity of salamandrids, see Griffiths (1996) for European species and Zhao et al. (1988) for Asian species. Halstead (1992) comments on toxicity of newts. Studies of phylogenetic relationships among genera of salamandrids are summarized by Titus and Larson (1995), and their relationships to salamanders of other families are summarized by Larson and Dimmick (1993). For a comprehensive listing of extant species, see Frost (1985) and Duellman (1993), and for fossils, see Estes (1981) and Duellman and Trueb (1986). See also Nussbaum et al. (1995) for recent taxonomic changes in the genus Tylototriton.

Newts of the family Salamandridae are unlike all other salamanders in having rough-textured skin that is not slimy. Costal grooves usually are not distinct. Most salamandrids have a biphasic life history with aquatic larvae and metamorphosed adults that may be terrestrial or aquatic. The tail is finlike in aquatic forms but not in terrestrial forms. Larvae have four pairs of gill slits and large external gills. Legs are relatively long, prominent and robust.

Detailed Characteristics of the Salamandridae

Morphology of the skull

The premaxilla may consist of a single bone or separated, paired bones. The angular bone is fused to the mandible. A frontosquamosal arch is present in some genera. Bilaterally paired nasal bones each ossify from a single, laterally positioned anlage; long posterior processes of the premaxillae extend between the paired nasal bones and completely separate them. Septomaxillary bones are absent. Lacrimal bone is absent. Quadratojugal bone is absent. Pterygoid bones are present. Internal carotid foramina are absent from parasphenoid bones. Ear bones feature fusion of the columella with the ear capsule, and a free operculum. Replacement of vomerine teeth proceeds medially. Teeth have a distinct crown and pedicel. Origin of the levator mandibulae anterior superficialis muscle includes the exoccipital.

A basilaris complex is present in the inner ear of some species and absent from others. The recessus amphibiorum is oriented horizontally in the inner ear. The otic sac is multilobate, vascularized and filled with calcium. Fibrous connective tissue is present around the amphibian periotic canal. The periotic cistern is small. The periotic cistern may or may not protrude into the fenestra.

The scapula and coracoid bones of the pectoral girdle are fused to form the scapulocoracoid. Vertebral centra are opisthocoelous. Ribs are bicapitate. Spinal-nerve foramina are present in neural arches of all vertebrae except for spinal nerves exiting between the atlas and first trunk vertebra. The pubotibialis and puboischiotibialis exist as separate muscles. Anterior glomeruli of the kidney are reduced or absent.

The diploid number of chromosomes is 22 (Notophthalmus and Taricha) or 24 (see Morescalchi, 1975).

The "true salamanders" and "newts" are not recognized as formal taxa, although the results of Titus and Larson (1995) are compatible with the interpretation that these groupings represent monophyletic sister taxa and potentially could be recognized as subfamilies. The exact phylogenetic position of the newt, Salamandrina terdigitata, is uncertain (see below) and requires better resolution before we can be confident that the newts form a monophyletic group.

The results of Titus and Larson (1995) suggest that the genera Mertensiella and Triturus, as currently recognized, are not monophyletic groups. Further work is needed to resolve in detail the phylogenetic relationships of species placed in these genera, but future taxonomic revisions are likely for both genera.

Titus and Larson (1995) review 48 morphological and reproductive characteristics that contain phylogenetic information on relationships among genera of the Salamandridae (see also ?zeti and Wake, 1969; Wake and ?zeti, 1969; Sever, 1992). No single feature uniquely characterizes all salamandrids as a monophyletic group, but a combined analysis of these characters and variation in ~1,000 bases of mitochondrial DNA sequence strongly supports monophyly of the Salamandridae. This analysis of the combined morphological and molecular characters gives strong support to the monophyly of the true salamanders (genera Chioglossa, Mertensiella and Salamandra) and to monophyly of a group containing all newts except Salamandrina terdigitata.

Within the true salamanders, Salamandra is clearly a monophyletic genus and a group containing Salamandra plus Mertensiella luschani appears monophyletic (Titus and Larson, 1995). Mertensiella caucasica appears closer phylogenetically to Chioglossa than to M. luschani and Salamandra, which makes Mertensiella nonmonophyletic. The main morphological characteristic used to diagnose Mertensiella is presence in males of a cutaneous dorsal papilla near the base of the tail. This papilla may function in the mating ritual but its exact role is unclear. This characteristic might have been present in the most recent common ancestor of all true salamanders and subsequently lost in the lineages leading to Chioglossa and Salamandra, which would make Mertensiella paraphyletic; alternatively, the papilla might have evolved in parallel in the lineages leading to the two species of Mertensiella, which would make the genus polyphyletic.

Knowledge of phylogenetic relationships permits interpretation of the evolution of several morphological characters that have been important in the evolutionary diversification of salamandrids. Rough, keratinized skin characterizes all newts except the highly aquatic species, Pachytriton labiatum. Rough skin appears to have evolved in a common ancestor of the newts after their separation from the true salamanders, followed by loss of keratinized skin in the Pachytriton lineage.

Evolution of courtship in salamandrids appears to involve separate evolutionary origins of mating behaviors in which the male actively captures the female on its ventral surface (Mertensiella, Salamandra, Pleurodeles, and Tylototriton), dorsal surface (Notophthalmus and Taricha) or tail (Euproctus). Capture of the female by the male is absent in the other genera, and absence of capture is considered the ancestral condition for salamandrids. Additional data on the courtship of Salamandrina, which currently is unknown, are required to clarify the evolutionary sequence of changes in courtship behavior.

The phylogenetic analysis suggests that egg-laying is ancestral for salamandrids and that the live-bearing observed in Mertensiella and Salamandra is evolutionarily derived. Presence of well-developed lungs is ancestral for salamandrids with three evolutionarily independent reductions or losses of lungs in the genera Chioglossa, Euproctus and Salamandrina.

Two cranial characters provide synapomorphies for subgroups of salamandrids (Titus and Larson, 1995). Presence of a frontosquamosal arch is a derived characteristic found in all newts but no other salamanders. Fusion of the premaxillary bones in salamandrids is a synapomorphy of all newts excluding the genera Pleurodeles, Salamandrina and Tylototriton, although this character has arisen independently in other salamanders (see Wake and Larson, 1987). Other cranial characteristics show more complex patterns of evolution in the Salamandridae.

David Heyse, Todd Jackman, David Maddison and Tom Titus contributed to the preparation of this Tree of Life page.