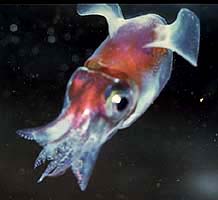 The phylogenetic tree is based on relationships suggested by Naef (1923) and conjecture based on comments given below.

Sepiolids are small (ca. 1-10 cm ML), broad cephalopods with a rounded posterior mantle and ear-like fins. Species of the Rossinae and Sepiolinae are benthic while those of the Heteroteuthinae are pelagic. The most distinctive group is the Heteroteuthinae in which the ventral mantle margin extends beneath the head, and the photophores are fused into a single large organ. All sepiolids, where known, lay large benthic eggs and the young hatch out at an advanced stage of development and their length may be one quarter of that of the adult female (Naef, 1921-23).

The NewSubFamily does not fit well in the Order Sepioidea as two basic sepioid characters (eyes with secondary eyelids; funnel with lateral adductor muscles) are missing. Our first impression was that the NewSubFamily was more closely related to the Myopsida. However, many features commonly associated with the Sepioidea (absence of an interstellate connective, gills apparently without a branchial canal) and the Sepiolidae (globular sucker rings, general shape, fusion of the head and mantle in the nuchal region) convince us that its closest relationships belong within the Sepiolidae. The most convincing character is the presence of a ventral mantle adductor muscle which is common to members of the Sepiolida. The ventral mantle adductor in NewSubFamily is very weak and barely recognizable. This condition has led us to suspect that the absence of the two basic Sepioid characteristics listed above is due to loss. At present, the phylogenetic position of the NewSubFamily is guesswork since the phylogeny of the Sepiolida is in flux.

Choneteuthis tongaensis may be derived from an ancestral line leading to Sepiolina-like species and then to the remaining Heteroteuthinae. It has the heteroteuthin shield and silvery sides but lacks a tentacle organ, as does Sepiolina, but also lacks the web between arms I-III.

A list of all nominal genera and species in the Sepiolidae can be found here. The list includes the current status and type species of all genera, and the current status, type repository and type locality of all species and all pertinent references.

Naef (1921-3) divided the Sepiolidae into three subfamilies and placed Sepiolina in the Sepiolinae. We place it in the Heteroteuthinae. As Naef (1921-23) recognized, characteristics of this genus place it right between the two subfamilies. Choneteuthis which is presently not placed in any subfamily shows strong similarities to Sepiolina especially in having a large visceral photophore and ventral shield and lacking a tentacular organ. The latter feature is primarily responsible for separating Sepiolina from the remainder of the Heteroteuthinae.   Choneteuthis further confuses the boundries of the Heteroteuthinae.

Page: Tree of Life Sepiolidae Leach 1817. Authored by Richard E. Young. The TEXT of this page is licensed under the Creative Commons Attribution-NonCommercial License - Version 3.0. Note that images and other media featured on this page are each governed by their own license, and they may or may not be available for reuse. Click on an image or a media link to access the media data window, which provides the relevant licensing information. For the general terms and conditions of ToL material reuse and redistribution, please see the Tree of Life Copyright Policies.