Spirula spirula is a small, muscular species (45 mm ML) found in mesopelagic waters of the tropical open ocean. In the title photographs, the skin of the mantle is missing. The intact mantle is covered with regularly aligned collagen fibers that produce a silvery sheen, as seen on the head in the title photographs (Herring et al., 1981). Spirula carries an unusual internal shell that is calcareous and has the shape of a horn coiled in a single plane without the coils touching one another (open planispiral). 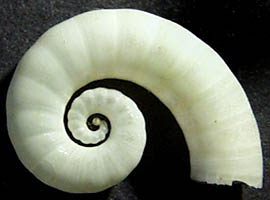 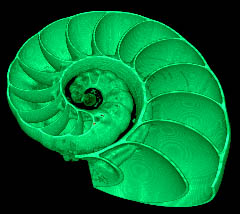 The shell, which retains the phragmocone and siphuncle of its distant ancestors, is used as a buoyancy device. The posterior position of the shell within the body causes the animal to generally orient vertically with the head downward. The unusual general appearance of Spirula with a narrow arm crown, bulging eyes, the peculiar structure of the mantle, the transverse orientation of the fins and the presence of the coiled shell makes this species very different in appearance from all other cephalopods.

The large posterior guard-like sheath of fossil relatives of Spirula seems to be designed to function as a counterweight to maintain the animal in a horizontal position. Such an orientation is particularly important for a bottom-associated animal that swims just above the ocean floor (Naef 1921-23). Presumably the ancestors of Spirula were bottom associated and some remnants of this behavior apparently remains in their life history and distribution (Young, et al., 1998). A small remnant of the sheath exists on the Spirula shell and a remnant of the ancestral habitat remains in Spirula's apparent benthic spawning (Young, et al., 1999).

A list of all nominal genera and species in the Spirulidae can be found here. The list includes the current status and type species of all genera, and the current status, type repository and type locality of all species and all pertinent references.

Spirula is able to withdraw its head and arms completely within the mantle; the mantle opening can then be closed by folding over the large dorsal and ventrolateral extensions (= flaps) of the mantle margin (Bruun, 1943). The photophore at the posterior end of the body is known to glow for hours at a time (Schmidt, 1922). When swimming slowly downward, head first, the terminal fins are pointed upward (i.e. posteriorly) and move with a rapid "waving or fluttering motion" that propels the animal downward (Bruun, 1943).

Virtually all cephalopods have mobile irises but for an oceanic, pelagic decapodiform the extreme contraction seen below in Spirula is unusual. 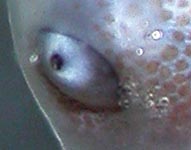 Mature ovarian eggs are 1.7 mm in the longest diameter (Bruun, 1943). Bruun (1943) suggests that the eggs are laid on the ocean floor and the capture of very small animals in deep water supports this idea (Bruun, 1943; Clarke, 1970). Clarke (1970) described a small squid with a mantle length of just over 2 mm and Bruun (1943) illustrated a similar squid that had a shell with just two chambers. These squid are, or are very close to being, hatchlings. The eyes in these individual are small and the buccal mass is very large with the beaks extending beyond the short arms. Note that only three arm pairs are present. 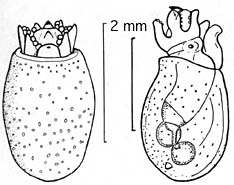 The shift in size frequency distribution over time in the region of the Canary Islands suggests to Clarke (1970) that this cephalopod has a life-span of 18-20 months. The ventral arms of the male are hectocotylized: They are much longer and thicker than the other arms (see title photograph) and possess a variety of unusual flaps and papillae but lack suckers. 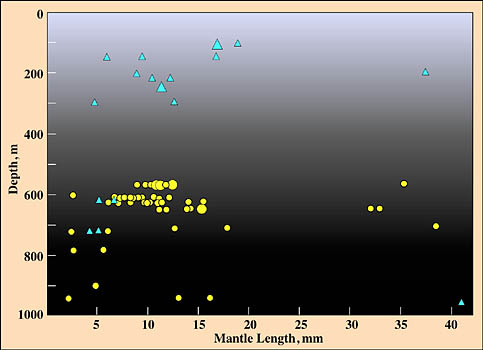 Most captures come from the tropical Atlantic and tropical IndoWest Pacific Oceans. Bruun (1943) found that Spirula is distributed mostly over the slopes of continents or islands where the bottom depth is between 1000 and 2000 m. The most numerous captures came from the vicinity of oceanic islands. Indeed, this animal was the most abundant midwater cephalopod collected in the region of the Canary Islands by Clark (1969).

Other Names for Spirula spirula Linnaeus, 1758

Page: Tree of Life Spirulidae Owen, 1836. Spirula spirula Linnaeus, 1758. Ram's-horn squid. The TEXT of this page is licensed under the Creative Commons Attribution-NonCommercial License - Version 3.0. Note that images and other media featured on this page are each governed by their own license, and they may or may not be available for reuse. Click on an image or a media link to access the media data window, which provides the relevant licensing information. For the general terms and conditions of ToL material reuse and redistribution, please see the Tree of Life Copyright Policies.