Sthenoteuthis oualaniensis, commonly known as tobiika, purpleback flying squid or purple squid (among other names), is thought to be the most abundant large squid in the tropical and subtropical waters of the Indo-Pacific region (Young and Hirota, 1998; Dunning, 1998). Its congener, S. pteropus, replaces S. oualaniensis in the Atlantic Ocean.

The dwarf form has several morphological characters that separate it from the typical S. oualaniensis: Absence of the dorsal photophore patch, slightly different hectocotylus and slight differences in the spermatophore structure and in the gladius structure (Nesis, 1993).  Paralarvae of the dwarf and middle forms cannot be distinguished (Nesis, 1993). Researchers have disagreed on whether or not the dwarf form is a distinct species (Clarke, 1965; Wormuth, 1976; Nesis, 1993). The most recent research on the status of the dwarf form was done by M. Roeleveld-Companyo and she considered it to be a separate species that can only be identified as an adult (personal communication). Snyder (1998) suggests that the giant form results from a plastic phenotype in the species. 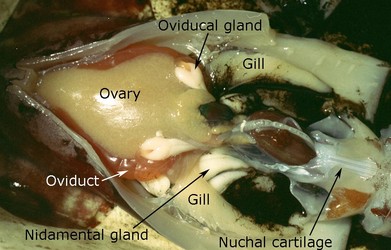 Figure. DORSAL view of the viscera of S. oualaniensis. The large ovary contains developing eggs of many sizes. The oviducts are filled with mature eggs that have an orange tint. The black pigment is ink that has dribbled into the mantle cavity. Photograph by M. Vecchione.

An egg mass, spawned in captivity, by the giant form of S. oualaniensis from the Arabian Sea has a "typical ommastrephid" appearance (Chesalin and Giragosov, 1993) which would be a large spherical, gelatinous egg mass with thousands of eggs distributed thoughout the mass. Mature oocytes (eggs) are small, 0.70 mm x 0.84 mm (Sakurai, et al., 1995).

In Hawaiian waters paralarvae are present throughout the year but are most abundant in August, less abundant in April and least abundant in October and December (Harman and Young (1985). Some seasonal overlap occurs between the occurrance of paralarvae of S. oualaniensis and the related Ommastrephes bartramii in Hawaiian waters and the Northwestern Pacific; however, most of the spawning of these two species is out of phase in time and space over much of the year (Young and Hirota, 1990; Bower, et al., 1999; Saito and Kubodera, 1993).

Growth of paralarvae based on statolith increments indicates a paralarva of 4 mm ML is 30 days old which is in strong contrast to the growth of O. bartramii which reaches 7 mm ML at 30 days (Bigelow, 1991).  Separation of the tentacles, usually thought to mark the end of the paralarval period in ommastrephids, occurred at about 9 mm ML in S. oualaniensis (Harman and Young, 1985). The validity of this event as the marker, however, has been questioned by Yatsu and Mori (2000). 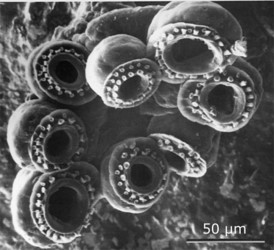 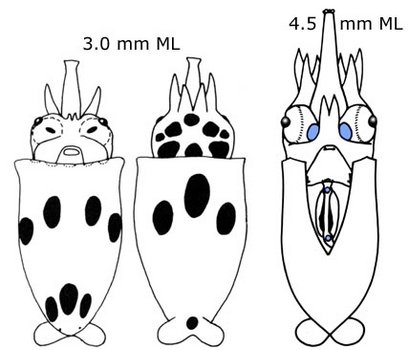 Juveniles are frequently found aggregated in inshore waters around oceanic islands (Okutani and Tung, 1978). The vertical distribution of juveniles is poorly known. Presumably they occupy near-surface waters during the day and night: Small S. oualaniensis have been found to glide onboard ship during the day (Young and Hirota, 1998), seen gliding over the surface of the ocean during the day (Arata, 1954; Young, 1975; Okutani and Tung, 1978) and found in the stomachs of day feeding birds (Ashmole and Ashmole, 1967). They are also encountered at the surface at night (Young and Hirota, 1998).

The diagnostic photophore patch on the anterodorsal surface of  the mantle becomes apparent at approximately 100 mm ML (Kishimoto and Kohno, 1992; Nesis, 1993) and can be taken as a marker for the end of the juvenile phase and the beginning of  the subadult phase of the life cycle. The hectocotylus develops about 110 mm ML (Okutani and Tung, 1978).  Males of S. oualaniensis reach 15-17 mm in 6-7 months and are thought to live less than a year; the growth rates, determined by growth marks on statoliths and gladii, of the middle and dwarf forms are nearly the same, but the life span is short in the small forms, probably not more than 6 months Nesis (1993).

Yatsu (2000) determined growth curves for both male and female S. oualaniensis based on statolith increments from about 120 mm ML to about 290 mm ML for females and about 185 mm ML for males. His curves are: ML=9.9511X0.634 (females) and ML=29.9X0.3494 (males) with ML in mm and x=increments=days (presumably). According to this curve a female of 120 mm ML is 51 days old. This contrasts strongly with data of Zaidi bin Zakaria (2000), which places a 115 mm ML female at an age of 95 days. Since ommastrephid growth is affected by food availability and ambient temperature, growth rates can  vary with season, geographic area and year (Yatsu, 2000).

At night squids are commonly observed in surface waters.  suggest, based on the near In Hawaiian waters subadults and adults of S. oualaniensis are usually absent from surface waters at night over bottom depths of less than 650 m,which suggests that they descend to at least 650 m during the day (Young and Hirota, 1998). Simarily, Dunning (1998) caught adult S. oualaniensis in eastern Australian waters only where bottom depths exceeded 600 m.

In many geographical areas of S. oualaniensis distribution, deep water can have low oxygen concentrations which should exclude its presence. Indeed, S. oualaniensis has a very high metabolic rate (standard metabolism of 348 ml O2 kg-1 h-1) that exceeds that of most fast-swimming oceanic fishes (Zuev, et al., 2002). Its energy metabolism, as in other squids, is based mostly on protein; however during metabolism a considerable proportion of the protein is catabolized anaerobically (Shullman et al., 2002).  In this sense, these squid may be "preadapted" for low oxygen environments. In the Indian Ocean large S. oualaniensis occupy depths of 300-400 m during the day where the oxygen concentration is 0.1-0.2 mg/liter (2-4% of saturation) (Shullman et al., 2002).

S. oualaniensis is a tropical IndoPacific species that occurs in the Pacific from southern Japan to southern Queensland and from just south of Baja California to northern Chile (Nesis, 1987). Dunning (1998) records S. oualaniensis as far south as 38°40'S (SST 20.7°C) at the northern edge of the Bass Straits, near the coast of Australia. In the Coral Sea Basin (east of  155°E), however, adults were caught only north of 32°S (SSTs>23.5°C). Eastward from the Coral Sea to near the coast of South America Wormuth (1976) records its presence roughly along 20°S to about 110°W then his southern records reach about 15°S but stop about 4° of  longitude west of Peru apparently at the edge of the Peru current. In the region of the Hawaiian Archipelago, S. oualaniensis did not occur in winter north of 28°N. Between 23°N and 28°N large females were few and of those few most were not mature; the ratio of mature to immature females of squid 200 mm ML or larger was 1:27 during one cruise (Young and Hirota, 1998). This suggests that at the northern end of their range, the females are not maturing normally. Tung et al. (1973) states that Taiwan (which lies roughly between 22 and 25°N)  is at "the edge area of the migration sphere of the common squid [S. oualaniensis] in the southwest water of Taiwan... ."  S. oualaniensis is recorded off Southern Japan at nearly 35°N (SST 25-26°C) (Saito and Kubodera (1993). Wormuth (1976) recorded the northern limit of distribution at 33.6°N and 165.5°E (September) and about 31°N at 156°W, 139°W and 129°W off Southern California west of the California Current. During the change of seasons the SSTs across most of the Pacific undergo a dramatic north-south movement. For example, north of Hawaii the 18°C isotherm can move from near 3O°N in February to over 40°N in August (Laurs and Lynn, 1991). The extent to which the latitudinal limits of the distribution of S. oualaniensis change with season are not known but do not appear to be very dramatic.

S. oualaniensis exhibits small-scale areal patterns in the vicinity of islands. Around the Hawaiian Islands large mature females are located on the windward (northeastern) sides of the islands, small immature females are located primarily within 25 km of the leeward (southwestern) sides of the islands and somewhat larger mostly immature females are found mainly further offshore on the leeward sides of the islands (Young and Hirota, 1998). The reason for these patterns is unknown but Young and Hirota (1998) found some differences in feeding patterns between windward and leeward areas. These local patterns and those observed in juveniles (Okutani and Tung, 1978) and in paralarvae (Bower, et al., 1999) indicate modified distribution patterns in the vicinity of islands.

Page: Tree of Life Sthenoteuthis oualaniensis (Lesson, 1830). Authored by Richard E. Young and Michael Vecchione. The TEXT of this page is licensed under the Creative Commons Attribution-NonCommercial License - Version 3.0. Note that images and other media featured on this page are each governed by their own license, and they may or may not be available for reuse. Click on an image or a media link to access the media data window, which provides the relevant licensing information. For the general terms and conditions of ToL material reuse and redistribution, please see the Tree of Life Copyright Policies.