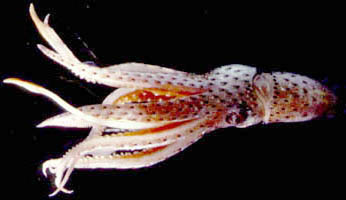 Species of Stigmatoteuthis are distinctive in having very long arms relative to the ML and paired secondary reproductive organs (penis, spermatophore gland complex, Needham's sac). Damaged individuals of Stigmatoteuthis can often be recognized by the sawtooth arrangement of photophores in the Basal Series of the head. At present differences between Atlantic and Indo-Pacific species are poorly defined and depend on mature males. Identification, therefore, rests primarily on location of capture.

Members of Stigmatoteuthis are easily recognized by the Type 1a photophore pattern of the head which has 3 photophores in the Midline Series and no rogue photophore (see pattern on next page). S. hoylei can be most easily separated from S. dofleini by the complex looping found in the ejaculatory apparatus of the spermatophore. It is most easily separated from S. arcturi by the presence on the hectocotylus of multiple sucker series, enlarged distal suckers and the absence of tubercules on this structue. If mature males are not available, separation is based on habitat.

In this clade of histioteuthids with bilaterally paired male secondary sexual organs, the first species described was Histiopsis hoylei Goodrich 1896. However, the type species of the nominal genus Histiopsis is H. atlantica, which has unpaired male organs and Histiopsis was subsequently placed in the synonomy of Histioteuthis (Voss,1969). Pfeffer (1900) described the genus Stigmatoteuthis, with type species S. hoylei (Goodrich 1896) by monotypy. (This is not the same species as Meleagroteuthis hoylei Pfeffer, 1900 which, according to Nesis, 1987, is a synonym of Histioteuthis meleagroteuthis.) Therefore Stigmatoteuthis Pfeffer 1900 is the valid-genus name designated for a species in this clade.

Probable paralarvae of this species are shown on the Histioteuthidae page.

During a study of vertical distribution off Hawaii, S. hoylei was captured at depths of 375-850 m during the day with most captures at depths greater than 500 m. At night captures were made at depths from 100-500 m. During both the day and night there is a size/depth trend with larger squid tending to be caught at greater depths.

S. hoylei has been reported throughout much of the tropical Pacific and tropical Indian Oceans (Voss, et al., 1998). When Voss et al., 1998, described the distribution of this species they believed all Pacific and Indian Ocean specimens to belong to S. hoylei. We have assummed that all of their records from off the west coast of the United States and the east coasts of Japan and Russia belong to S. dofleini and these the records have been eliminated from the chart presented here.

Drawings from Voss (1969) printed with the Permission of the Bulletin of Marine Science.

Page: Tree of Life Stigmatoteuthis hoylei (Goodrich 1896). Authored by Richard E. Young and Michael Vecchione. The TEXT of this page is licensed under the Creative Commons Attribution-NonCommercial License - Version 3.0. Note that images and other media featured on this page are each governed by their own license, and they may or may not be available for reuse. Click on an image or a media link to access the media data window, which provides the relevant licensing information. For the general terms and conditions of ToL material reuse and redistribution, please see the Tree of Life Copyright Policies.