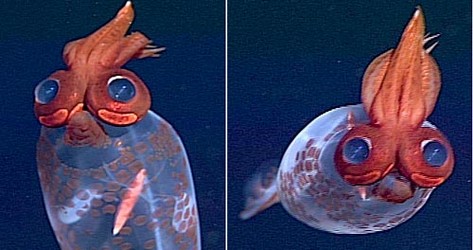 Taonius borealis, known only from the temperate and boreal North Pacific, reaches a maximum size of 50 cm ML (Nesis, 1972).

Akimushkin, I.I. 1963. Cephalopods of the Seas of the U.S.S.R. Academy of Sciences of the U.S.S.R., Institute of Oceanology, Moscow, 235 pages. English translation: Israel Program for Scientific Translations, Jerusalem, 1965.

Page: Tree of Life Taonius borealis (Nesis, 1972). Authored by Richard E. Young. The TEXT of this page is licensed under the Creative Commons Attribution-NonCommercial License - Version 3.0. Note that images and other media featured on this page are each governed by their own license, and they may or may not be available for reuse. Click on an image or a media link to access the media data window, which provides the relevant licensing information. For the general terms and conditions of ToL material reuse and redistribution, please see the Tree of Life Copyright Policies.