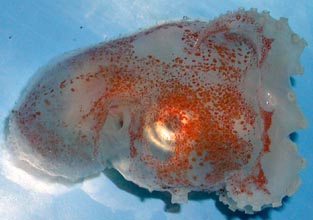 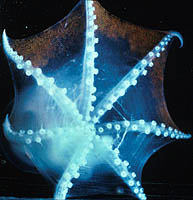 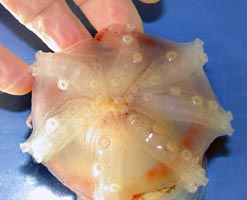 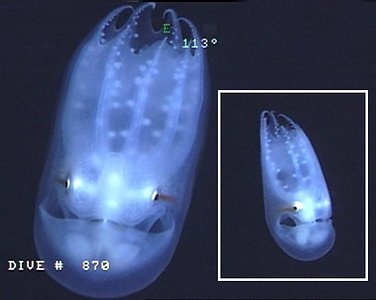 A large, brooding female was observed from a submersible off Hawaii at 270 m (top photograph below). The octopod was drifting just above the bottom and was carrying eggs that were held within the web and near the mouth (Young, 1995). The female was badly damaged as can be seen in the photograph by the truncated dorsal arms and the crease in one of the lower arms. Presumably the female was near the end of the brooding period and would not survive long after all young had hatched. The white arrow in the video frame to the right points to the eggs. The video of this octopod can be seen at Cephalopods in Action. A second H. atlantica was photographed in nearly the same locality on another occasion and it, also, appears to be a brooding female (bottom two photographs). 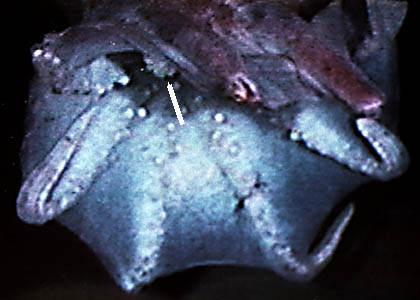 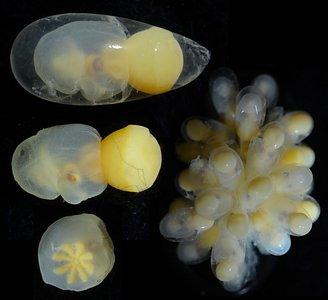 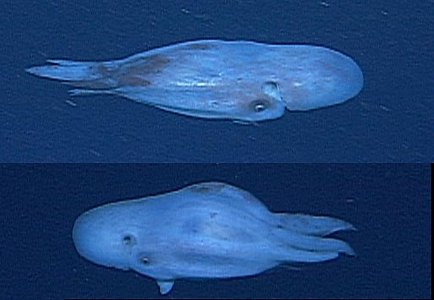 Figure. Top left - Oral view of a female H. atlanticus ca. 1 m in diameter, off Hawaii. brooding a small batch of eggs (arrow). Video frame from the submersible Pisces V, Hawaii Undersea Research Laboratory (from Young, 1995). Top right - Piece of an egg bundle with eggs 8 mm in length containing embryos of H. atlanticus that was captured in an open trawl that fished at about 300 m depth off the Cape Verde Islands.
Bottom - Two side views of a female H. atlanticus, swimming near the ocean floor at 519 m, that appears to be brooding eggs (ie, bowed arms, light color within arms). In situ photographs taken from an MBARI ROV. Photographs © 2013 MBARI.