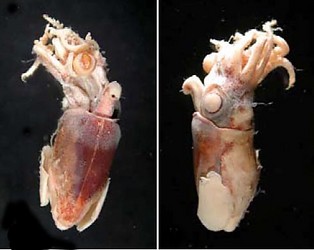 H. ryukyuensis is described from two squid, one male (18 mm ML) and one female (17 mm ML), vomited by a captured fish (ruby snapper). It has some very unusual features and doesn't fit well into the genus Heteroteuthis. With more new species recently found in the subfamily, the generic boundaries have become increasingly hard to define.

The fish from which H. ryukyuensis came was caught off the northeast coast of Taiwan. 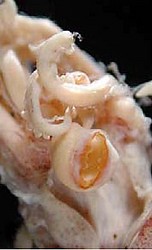 H. ryukyuensis differs in the following features from species previously placed in the genus Heteroteuthis:

Page: Tree of Life Heteroteuthis ryukyuensis Kubodera, T., T. Okutani and T. Kosuge 2009. Authored by Tsunemi Kubodera and Richard E. Young. The TEXT of this page is licensed under the Creative Commons Attribution-NonCommercial License - Version 3.0. Note that images and other media featured on this page are each governed by their own license, and they may or may not be available for reuse. Click on an image or a media link to access the media data window, which provides the relevant licensing information. For the general terms and conditions of ToL material reuse and redistribution, please see the Tree of Life Copyright Policies.