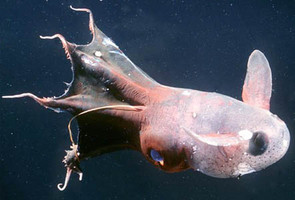 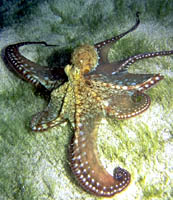 Naef (1923) felt that the origin of the Octopoda would "forever be obscure." But Naef was unaware of the significance of Vampyroteuthis which was believed to be a cirrate octopod at the time. We now know that the Vampyromorpha is the sister group of the Octopoda and that Vampyroteuthis provides telling clues to the origin of the octopods. Young, et al. (1999) suggest two possible methods for this origin as illustrated here. In one (benthic route) the pelagic ancestor becomes benthic in a horizontal attitude (similar to the sepiolids today) and subsequently the arms and mouth rotate under the head. In the other alternative (pelagic route) the pelagic ancestor develops an "oral" orientation (i.e. laterally spread arms) here pictured with the oral end downward (as in octopods today) and subsequently becomes benthic with the oral end down.

Evidence for the latter route is found in the structure of the brain. Octopods have a series of lobes in the brain, the inferior frontal lobe system, that is derived from the posterior buccal lobe. These lobes process complex chemotactile information from the arms. Vampyroteuthis has an "insipient" inferior frontal lobe system (J. Young, 1977). This bathypelagic animal apparently has a relatively advanced system for processing chemotactile information from the arms, one that surpasses that of shallow-living benthic decapods. Apparently Vampyroteuthis uses its arms in an unusual manner. Young, et al. (1999) suggest that like its immediate ancestor (a "pre-octopod"), associates with pelagic jellyfish or tunicates and uses its arms and suckers to adhere to and/or explore the surfaces of these gelatinous animals. That is, it has an oral orientation for contact with surfaces. The pre-octopod, then was pre-adapted for settling on the ocean floor in an oral-end down configuration. This oral orientation enabled octopods to become the effective crawling animals that most are today. However the manner in which Vampyroteuthis actually uses its arms and its possible association with gelatinous animals has yet to be demonstrated.

Page: Tree of Life Octopodiformes Berthold and Engeser, 1987. Vampire Squid and Octopods. Authored by Richard E. Young and Michael Vecchione. The TEXT of this page is licensed under the Creative Commons Attribution-NonCommercial License - Version 3.0. Note that images and other media featured on this page are each governed by their own license, and they may or may not be available for reuse. Click on an image or a media link to access the media data window, which provides the relevant licensing information. For the general terms and conditions of ToL material reuse and redistribution, please see the Tree of Life Copyright Policies.