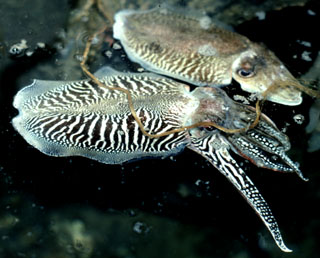 This family has 3 genera with more than 100 species. 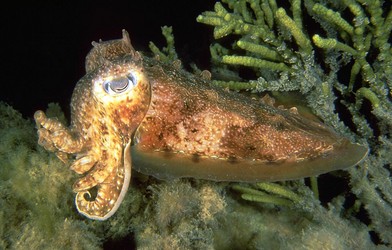 Figure. Side view of Sepia apama. Photograph by Mark Norman.

The Sepiidae have a tropical/temperate distribution. They are mostly shallow-water animals although they are known from depths of about 600 m (Lu and Roper, 1991). They have an unusual biogeographic pattern (seen below, in white) in which they are absent from the Americas. Young, et al. (1998) suggest that by the time the family evolved in the Old World, the northern migration bridge across the Atlantic was closed to these warm water species. 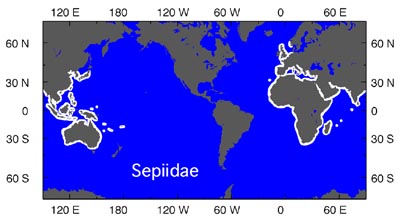 Page: Tree of Life Sepiidae Keferstein. 1866. Authored by Katharina M. Mangold (1922-2003) and Richard E. Young. The TEXT of this page is licensed under the Creative Commons Attribution-NonCommercial License - Version 3.0. Note that images and other media featured on this page are each governed by their own license, and they may or may not be available for reuse. Click on an image or a media link to access the media data window, which provides the relevant licensing information. For the general terms and conditions of ToL material reuse and redistribution, please see the Tree of Life Copyright Policies.