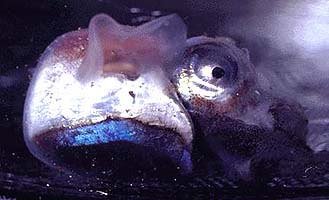 Species of Stoloteuthis are heteroteuthins with a large ventral shield (note the dramatic blue fringe to the shield in the title photograph) but exhibit unusual variability in the dorsal fusion of the head and mantle. The genus as constituted here may not form a natural group due to the inclusion of the poorly known S. weberi.

S. weberi, which is known only from the type specimen, was formerly placed in Heteroteuthis. This species lacks a dorsal head-mantle fusion, a feature that distinguishes it from all other Stoloteuthis, but in the arrangement of arm suckers, it resembles Stoloteuthis species. S. maoria was formerly placed in Iridoteuthis. Harman and Seki (1990) re-examined S. maoria and found that it was similar to Iridoteuthis iris in its broad head-mantle fusion, middorsal mantle buldge and posteriorly pointed fins. We place S. maoria in Stoloteuthis on the basis of the arm modifications in mature members of both sexes which are similar to Stoloteuthis leucoptera. 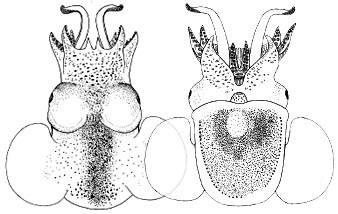 S. leucoptera is known from off the eastern United States and the eastern Atlantic including the Mediterranean Sea; S. weberi from Indonesia (7.6°S, 117.5°E) and S. maoria from off New Zealand. Unidentified species of Stoloteuthis have been reported from near the Kerguelens, Prince Edward Islands (southern Indian Ocean), Discovery Bank (southeast Atlantic (Nesis, 1982/87) and east of Tasmania (Villanueva and Sánchez, 1993).