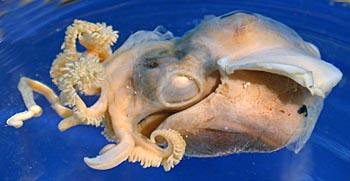 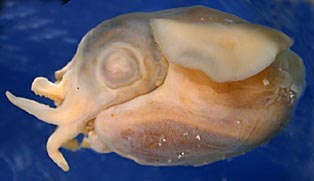 Four specimens of Amphorateuthis alveatus (first known as New Genus sp. A on this page) were captured off the west coast of Africa in 1964 by the R/V ANTON BRUUN. These mature or nearly mature individuals, which represent a new species, are very unlike any known genus in the Heteroteuthinae and are placed in a new genus. 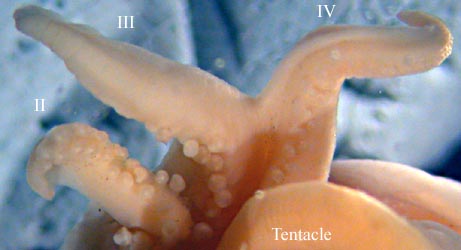 Figure. Oral view of arms II-IV of the female of A. alveatus.

Figure. Funnel/mantle locking-apparatus of A. alveatus, holotype. Top - Longitudinal section through the mantle adjacent to the mantle lock showing the large knob at the anterior end in side view. Bottom - Frontal view of the funnel component showing the slender posterior grove and the deep anterior pit. Magnification of the two views differ slightly. Photographs by R. Young. 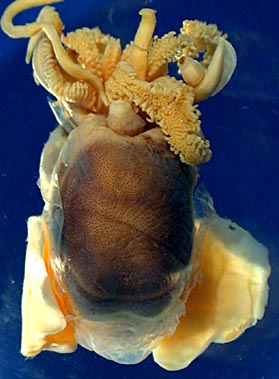 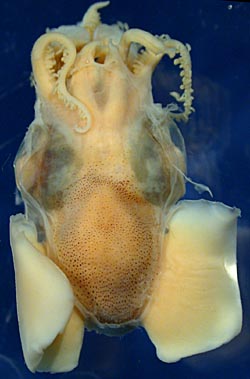 The bizarre sexual modifications of the arms in mature males distinguishes A. alveatus from all other members of the subfamily. The elongate suckers and the large anterior extension of the ventral mantle is similar to that of Nectoteuthis pourtalesii. The latter species, however, has elongate suckers in two series on all arms. In addition, the suckers of N. pourtalesii lack long stalks, the mantle and head in N. pourtalesii are not fused and the fins do not extend to the posterior end of the mantle. Among the other genera, A. alveatus is most similar to Iridoteuthis iris in the placement and shape of the fins, the broad dorsal fusion of the head and mantle, and the presence of large aboral flaps on some arms. The modifications of the arms in mature males and females, however, are entirely different between these species.

Type locality: Indian Ocean off the west coast of Tanzania at 06°51'S, 39°54'E where the holotype and paratype no. 1 were taken. Paratype no. 3 was taken virtually the same locality in a 40 ft. trawl that fished to 100 m depth, presumably a bottom trawl as the mantle cavity was filled with calcareous sand. Paratype no. 2 was taken nearby at 06°48'S, 39°51'E.