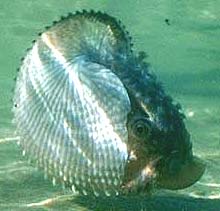 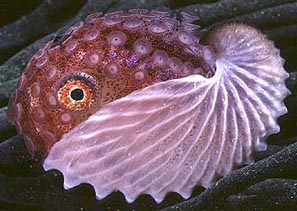 An unusual feature of argonauts is the secreted shell that functions as a brood chamber. The "shell" is not homologous with the true molluscan shell as evidenced by its unique site of formation: the dorsal arms of the female rather than the internal shell sac as in other coleoids. Naef (1921/3) noted the remarkable resemblence of the argonaut shell to the shells of some of the abundant Cretaceous ammonoids and suggested that the argonaut shell evolved in the following way: Ancestral argonauts occupied empty ammonoid shells during the late Cretaceous. [Occupancy of molluscan shells by octopodids is common in the present day.] The octopod evolved glandular structures on the arms to repair the shell of the ammonoids after the latter had become extinct at the end of the Cretaceous. Eventually, the ammonoid shell was completely replaced by a secreted structure whose shape had been evolutionarily molded by the ammonoid shell. However, as pointed out by Young et al. (19998), a gap of about 40 million years exists between extinction of ammonoids and the earliest fossil record of an argonaut and they suggest that the mold for the shell was from some other type of mollusc and that the resemblance to ammonoids is coincidental. The origin of the argonaut shell is a challenging problem and has important implications for understanding the relationships amoung groups of the Argonautoidea (Young, et al., 1998).