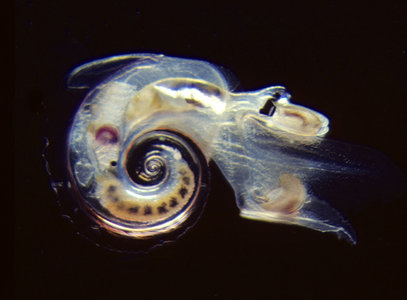 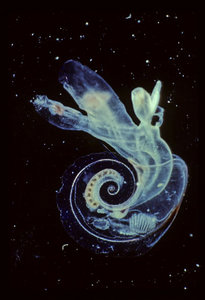 Atlanta peronii is the type species in the genus Atlanta. It attains the largest size of all atlantids (to 10 mm shell diameter). The walls of the shell are unusually thick and strong. The keel is moderately tall and rounded in side profile, with a slightly truncated leading edge. The keel base is clear in young animals, but changes with age to a light brown and then a dark yellowish-brown. The keel inserts between the fourth and fifth whorls in shells larger than about 3 mm. The spire consists of 3-1/2 to 3-3/4 whorls. The whorl surfaces are smooth. The sutures between the first and second whorls are shallow, while those between subsequent whorls are incised. Full grown shells can consist of up to 6 whorls. Shell transparent, but can become faintly yellow in large individuals. Eyes type b. Operculum type b. Radula type II, large with sexually-dimorphic marginal teeth. The species is cosmopolitan in tropical to subtropical waters. In Hawaiian waters, A. peronii is a strong nocturnal vertical migrator, ranging downward to a daytime maximum of 300 m and migrated into the upper 150 m at night.

An Atlanta peronii species group was recognized by van der Spoel (1976) that included three species; A. peronii, A. gaudichaudi and A. pacifica. Subsequently, A. pacifica was synonymized with A. peronii and A. gaudichaudi placed in its own species group that contained three species, A. gaudichaudi, A. plana and A. echinogyra (discussed in Richter and Seapy, 1999). The A. peronii species group now includes four species, A. peronii, A. rosea, A. fragilis, and A. frontieri. Richter (1993) resurrected as a valid species A. rosea, which had been described by Souleyet in 1852 but subsequently treated as a junior synonym of A. peroni by Tesch (1908, 1949), and the latter two species were described as new species. The current pair of species groups are distinguished by markedly different radulae (discussed by Richter and Seapy, 1999; see the genus Atlanta page).

Diel vertical distribution patterns of A. peronii off the leeward coast of Oahu, Hawaii was studied by Seapy (1990b, 2008). In the former study, the species ranged downward to a daytime depth of 200-300 m (the maximal depth interval sampled), and migrated into the upper 150 m of the water column at night. In the latter study, vertical distribution patterns were studied at three stations located at 1, 5 and 15 nmi offshore. The species was recorded to a daytime depth of 160-200 m at the 5 and 15 nmi stations, while at night a slight upward migration was suggested since the deepest depth interval containing specimens was 120-160 m at both stations. Also, the abundance of A. peronii decreased shoreward by 50% from the 15 nmi to the 1 nmi station (comparison based on the mean nighttime densities at each station).

Page: Tree of Life Atlanta peronii Lesueur 1817. Authored by Roger R. Seapy. The TEXT of this page is licensed under the Creative Commons Attribution License - Version 3.0. Note that images and other media featured on this page are each governed by their own license, and they may or may not be available for reuse. Click on an image or a media link to access the media data window, which provides the relevant licensing information. For the general terms and conditions of ToL material reuse and redistribution, please see the Tree of Life Copyright Policies.