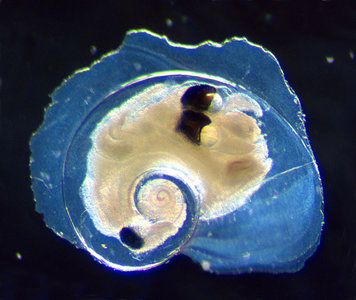 Atlanta selvagensis is a small species (<2.0 mm shell diameter). The shell is transparent except for the keel base, which is yellow-brown to brown, and the spire sutures, which are reddish-brown (magenta). The keel is tall, truncate along its leading edge, and it does not insert between the penultimate and last shell whorls. The shell spire is low conical, usually consisting of 3-1/2 to 3-3/4 whorls. Spire whorl ornamentation is highly variable, ranging from none to fully developed; in the latter case, evenly-spaced spiral ridges are present on the second through fourth whorls. Eyes type a, operculum type c, and radula type I. The species is found in tropical to subtropical waters of the Atlantic and Indian Oceans. Except for the number of whorls comprising the shell spire and the presence of suture coloration, A.selvagensis shares other morphological features with A. inflata from the Pacific Ocean (see the Atlanta inflata page).

Atlanta selvagensis was described in 2006 based on eight specimens collected in September 2000 by staff of the Museum Scientiarum Biologicarum Canariensium, Tenerife, Canary Islands from waters around the Selvagens Islands. Vertical tows to 500 or 1,000 m were taken with a triple net system (mouth opening = 0.25 m2). While assisting A. de Vera with the identification of the atlantids from these collections, R. Seapy was not able to identify one of the species; he found that it was closest in appearance to the Indo-Pacific A. plana. Like A. plana it had distinctive reddish brown sutures and limited (but more variable) numbers of spiral ridges on the shell spire. However, it lacked the unique gyre spination on the operculum seen only in A. plana; its keel was tall with a truncate leading edge (moderately low and rounded in A. plana); and the largest shell was only 1.5 mm in diameter (to 3.0 mm in A. plana). The species with which it was most similar, A. inflata, was not considered a possibility because it has been universally regarded as a cosmopolitan species (dating back to the 1908 systematic revision of the genus Atlanta by Tesch) and, in the atlantid fauna of the Hawaiian Islands studied by Seapy, A. inflata was shown to lack spire suture coloration and to have a spire consisting of 4-1/4 to 4-1/2 whorls; instead of the 3-1/2 to 3-3/4 whorls seen in the unidentified species (see the Atlanta inflata page).

In 2008 Arie Janssen was attempting to identify the atlantid shells collected from bottom samples in the North Atlantic and Mediterrancean Sea. He was confounded by a problem with the identification of a number of specimens that he couldn't distinguish between Atlanta inflata (as described previously by other European authors) and A. selvagensis (in the species description by de Vera and Seapy, 2006). Janssen and Seapy had been communicating by e-mail for several years previously about taxonomic issues in the genus Atlanta, and in 2008 Janssen began to suspect that the shells of A. selvagensis and those he had tentatively identified as A. inflata belonged to the same species. In agreement with the description of A. selvagensis, his shells were small (to 2.0 mm), had a tall keel with a truncate leading edge, and had a spire of about 3-1/2 to 3-3/4 whorls. These observations subsequently led to the conclusion by Janssen and Seapy (2009) that: (1) the species described as A. inflata by Soulyet in 1852 from the northwestern Pacific and characterized from Hawaiian waters by Seapy in 1990, was restricted to the Pacific Ocean (see the Atlanta inflata page), and (2) that those specimens previously identified as A. inflata from the Atlantic and Indian Oceans was a different species, which (4) should henceforth be attributed to A. selvagensis.

One aspect of the study by Janssen and Seapy (2009) that is peculiar is the geographic distribution of A. selvagensis. Because of the connection of the Pacific and Indian Oceans between southeast Asia and northern Australia, exchange of waters between the two oceans would, hypothetically, enable planktonic species to range across both oceans. Thus, the Indo-Pacific distributions of three species of Atlanta (A. echinogyra, A. plana, and A. turriculata; Richter and Seapy, 1999) are not surprising. However, among all species of heteropods, only A. selvagensis appears to occur in the Atlantic and Indian Oceans. The presence of A. inflata (= A. selvagensis) in the Indian Ocean was documented by Richter (1974). His scanning electron micrographs of the right side of the shell (see below) clearly illustrate the characteristic spire consisting of 3-3/4 whorls, the presence of spiral ridges on the spire whorls, a small shell (<2 mm), and a tall keel with a truncate leading edge. 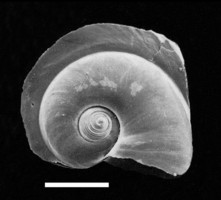 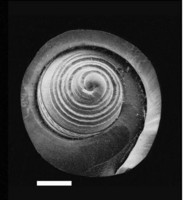 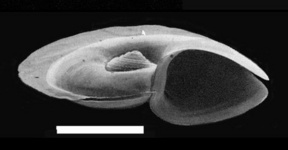 Figure. Scanning electron micrographs of the shell of Atlanta inflata (= A. selvagensis) from the northwestern Indian Ocean, modified from scans of the original images of Richter (1974, Plate I, Fig.4) with scale bars added based on magnification data. Views are of the right side of the whole shell (left), the shell spire (center) and at about a 75° tilt (right). Scale bars = 0.5 mm (left and right) and 100 µm (center); all added to the scanned images. © 1974 G. Richter

Janssen, A. W. and R. R. Seapy. 2009. On the identity and distribution of Atlanta inflata Gray, 1850 (Gastropoda, Pterotracheoidea, Atlantidae) in the world's oceans. Basteria.

Tesch, J. J. 1908. Systematic monograph of the Atlantidae (Heteropoda) with enumeration of the species in the Leyden museum. Notes from the Leiden Museum 30: 1-30.

Page: Tree of Life Atlanta selvagensis de Vera and Seapy 2006. Authored by Roger R. Seapy. The TEXT of this page is licensed under the Creative Commons Attribution License - Version 3.0. Note that images and other media featured on this page are each governed by their own license, and they may or may not be available for reuse. Click on an image or a media link to access the media data window, which provides the relevant licensing information. For the general terms and conditions of ToL material reuse and redistribution, please see the Tree of Life Copyright Policies.