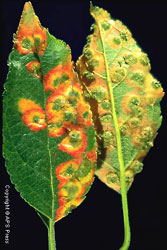 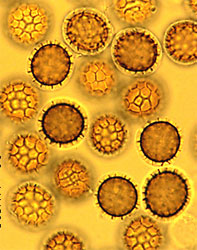 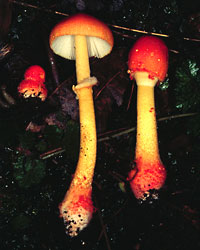 The Basidiomycota is the sister group of the Ascomycota. The tree shown above is based on Swann and Taylor’s (1993) analysis of nuclear small subunit ribosomal DNA sequences.

Basidiomycota have a huge impact on human affairs and ecosystem functioning. Many Basidiomycota obtain nutrition by decaying dead organic matter, including wood and leaf litter. Thus, Basidiomycota play a significant role in the carbon cycle. Unfortunately, Basidiomycota frequently attack the wood in buildings and other structures, which has negative economic consequences for humans.

Humans have found diverse uses for Basidiomycota. Mushrooms, both cultivated and wild, are eaten in many countries. For the untrained, mushroom-hunting is a risky endeavor, because some Basidiomycota produce deadly toxins (Benjamin 1995). The basidiomycete toxin phalloidin (from the mushroom Amanita phalloides) binds actin, which is a component of microfilaments. Fluorescent stains that incorporate phalloidin are used by cell biologists to visualize the cytoskeleton. Other "toxins" produced by Basidiomycota include hallucinogens, which are produced by members of the genus Psilocybe (and other groups). Species of Psilocybe have traditionally been used in Central American indigenous cultures as a spiritual tool, and are now cultivated for the illicit drug trade. Other biochemical compounds of Basidiomycota that have practical uses include astaxanthin, a red pigment produced by the basidiomycetous yeast Phaffia (used to add color to farmed salmon), and certain enzymes from wood-decaying Basidiomycota that have potential applications in paper production and bioremediation (decontamination of polluted environments using biological agents).

Basidiomycota are unicellular or multicellular, sexual or asexual, and terrestrial or aquatic. Indeed, Basidiomycota are so variable that it is impossible to identify any morphological characteristics that are both unique to the group and constant in the group. The most diagnostic feature is the production of basidia (sing. basidium), which are the cells on which sexual spores are produced, and from which the group takes its name. A long-lived dikaryon, in which each cell in the thallus contains two haploid nuclei resulting from a mating event, is another characteristic feature. Finally, clamp connections are a kind of hyphal outgrowth that is unique to Basidiomycota, although they are not present in all Basidiomycota. The following description of the characteristics of Basidiomycota traces the life cycle of a "typical" species, beginning at the site of meiosis.

The basidium is the cell in which karyogamy (nuclear fusion) and meiosis occur, and on which haploid basidiospores are formed (basidia are not produced by asexual Basidiomycota). Many Basidiomycota produce basidia on multicellular fruiting bodies (e.g., mushrooms), but basidia can also be formed directly from yeasts or other single cells. There is a great range of variation in morphology of the basidium, the number of spores formed, and how the spores are borne on the surface of the basidium (Ingold 1991). Typically, four spores are produced on each basidium, at the tips of minute stalks called sterigmata (Fig. 1). Each spore usually contains one or two of the haploid meiotic products.

One of the most fascinating characteristics of Basidiomycota is the production of forcibly discharged ballistospores (Fig. 2), which are propelled into the air from the sterigma. Ballistospores may be sexual or asexual, and may be produced by basidia, hyphae, yeast cells, or even other ballistospores. This type of spore discharge must have evolved very early in the evolutionary history of the Basidiomycota as it is found in members of the earliest diverging lineages within the group. Ballistospory is associated with forms that disperse their spores directly into the air. Most aquatic Basidiomycota and forms that produce spores inside the fruiting body, such as puffballs, have lost ballistospory.

Ballistospory is associated with the production of a liquid filled "hilar droplet" that forms at the base of the spore, just above its attachment to the sterigma (Fig. 2). Resolving the mechanism of ballistospory has been a longstanding problem in mycology (Buller 1909, 1922; Ingold 1939; McLaughlin et al. 1985; Webster et al. 1984a, b; Yoon and McLaughlin 1986). In a series of studies, reviewed by Money (1998), it has been shown that spore discharge occurs when the hilar droplet fuses with a film of liquid on the surface of the spore. The rapid coalescence of the liquids causes a sudden shift in the center of mass of the spore and contributes to its release from the sterigma. This mechanism has been termed a "surface tension catapult" and it results in spores being discharged with a force of about 25,000 g (Money 1998).

Figure 2. Scanning electron micrograph showing the hilar droplet at the base of a basidiospore (Coprinus cinereus: Hymenomycetes).
(From McLaughlin et al. 1985)

Basidiospores germinate to form hyphae (filaments) or yeast cells that are typically haploid and uninucleate. The hyphae of Basidiomycota are septate. Ultrastructural features of the septa, visible with transmission electron microscopy, have been important in developing phylogenetic hypotheses in Basidiomycota (see Hymenomycetes page).

Mating in Basidiomycota involves fusion of haploid cells, but fusion of the nuclei is usually delayed until the basidia are formed. Thus, the dominant phase of the life cycle in most Basidiomycota is a dikaryon, in which the two nuclei brought together in mating exist side-by-side in each cell (Fig. 3A). Sometimes a dikaryon can donate a nucleus to a uninucleate "monokaryon", resulting in a "di-mon" mating.

Sexually reproducing Ascomycota also form dikaryons, although they are not as long-lived as those of Basidiomycota. The clade that includes Ascomycota and Basidiomycota has been called the Dikaryomycotina, reflecting this presumably homologous similarity. Ascomycota produce clamp-like "croziers" at the bases of asci (cells in which meiosis occurs, homologous to basidia). Croziers may be homologous to clamp connections.

There is strong evidence that the Basidiomycota is monophyletic. Ballistospores, basidia, and clamp connections are present in each of its major subgroups (although not in all species), suggesting a common origin. Non-molecular characters that have been used to recognize major groups within the Basidiomycota include the form of the basidia (shape and septation), ultrastructure of hyphal septa and spindle pole bodies, presence or absence of yeast phases and "spore repetition" (production of spores directly from spores), and cellular carbohydrate composition (McLaughlin et al. 1995; Oberwinkler, 1987; Prillinger et al. 1990, 1991). Sequences of ribosomal genes (rDNA) have played a major role in increasing our understanding of the relationships within Basidiomycota, and have demonstrated that some previously emphasized morphological attributes, such as the form of basidia, are subject to homoplasy (Swann and Taylor 1993, 1995; Swann et al. 1999).

Three major groups are recognized within the Basidiomycota: 1) Urediniomycetes includes rusts (Uredinales) and other taxa (Swann et al. 2001); 2) Ustilaginomycetes includes smuts (Ustilaginales) and others (Bauer et al. 2001); and 3) Hymenomycetes includes mushrooms (Homobasidiomycetes), jelly fungi (Auriculariales, Dacrymycetales, Tremellales) and others (Hibbett and Thorn 2001, Swann and Taylor 1995, Wells and Bandoni 2001). Monophyly of each of these groups has been strongly to moderately supported in phylogenetic analyses of rDNA sequences, especially nuclear small subunit rDNA (Swann and Taylor, 1993, 1995; Swann et al. 1999). Analyses of nuclear large subunit rDNA sequences have provided only weak support for monophyly of the Ustilaginales, however (Bauer et al. 2001). The pattern of relationships among the Urediniomycetes, Ustilaginomycetes, and Hymenomycetes are not well resolved by rDNA sequences. Similarities in the ultrastructure of septal pores and spindle pole bodies (McLaughlin et al. 1995) suggest that Ustilaginales and Hymenomycetes could be sister groups, but not all rDNA phylogenies show this topology. Additional data from multiple genes are probably needed to resolve the deepest divergences in the Basidiomycota.

John Taylor, David McLaughlin and Elizabeth Frieders provided helpful comments during the development of an earlier version of this page. Development of this page since 2003 was facilitated by the "Deep Hypha" Research Coordination Network and the "Assembling the Fungal Tree of Life" project (NSF awards DEB-0090301 and DEB-0228657). Thanks to Nicholas P. Money for additional comments.

Correspondence regarding this page should be directed to David S. Hibbett at