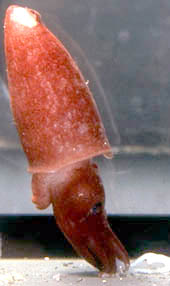 This deep maroon-colored squid inhabits the meso- and bathypelagic zones of all oceans of the world. It is particularly abundant in the Southern Ocean where it seems to be the dominant small deep-sea squid. Bathyteuthis remained monotypic from the time of its discovery by the famous Challenger Expedition until 1968 when two additional species were recognized and described (Roper, 1968).

Bathyteuthis abyssicola was described in 1885 by Hoyle. Benthoteuthis megalops was described by Verrill, also in 1885. These species were recognized as being the same entity, but both names continued to be used for years because no firm date of priority for publication had been established. In 1900, Pfeffer finally synonymized Benthoteuthis megalops with Bathyteuthis abyssicola at the same time he erected the Family Bathyteuthidae. The actual dates of publication of these two species were not verified until 1969 when it was established conclusively that B. abyssicola had priority by two months (Roper, 1969).

The type locality for this species is in the southern Indian Ocean between the subantarctic islands of Crozets Is. and Prince Edward Is.

This bathypelagic species normally occurs at 700-2000 m, but records are given as 100-4200 m; the greater depths probably are artifacts from open (non-closing) sampling nets. Paralarvae and juveniles live at shallower depths than adults. In the Southern Ocean (Antarctic Ocean), the population undertakes a deep diel vertical migration (Roper, 1969). The population in the eastern tropical-subtropical North Atlantic also demonstrates a diel vertical migration (Clarke & Lu, 1975; Lu & Clarke, 1975).

Bathyteuthis abyssicola is cosmopolitan in the world oceans. It is circumpolar in the Southern Ocean and in the highly productive waters of the eastern Pacific, the Atlantic, and the Indian Oceans (Roper, 1969).

Verrill, A.E. 1885. Third catalog of Mollusca recently added to the fauna of the New England coast and the adjacent parts of the Atlantic, consisting mostly of deep-sea species with notes on others previously recorded. Transactions of the Connecticut Academy, 6(2): 395-452.