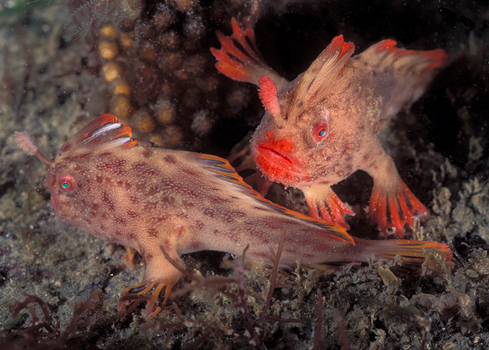 The handfishes are a poorly-known lophiiform family containing four described species, all in a single genus Brachionichthys. Handfishes are restricted to dispersed inshore marine habitats off southern Australia and primarily Tasmania. Like most other shallow-dwelling lophiiforms, they are exclusively benthic. Several species in the family are of conservation concern and listed as vulnerable to extinction by the Australian government (Last et al., 1983).

Australia's CSIRO has produced a QuickTime clip that outlines the conservation status of the spotted handfish (Brachionichthys hirsutus) and demonstrates the walking motion of brachionichthyids.

Body deep; skin naked or covered with denticles. Second dorsal spine joined to the third by a membrane. Gill opening small, behind pectoral fin base. Dorsal-fin rays 15-18; anal-fin rays 7-10. Pelvic fin with one spine and 4 rays. A small illicium present just above mouth, function of which is unknown but does not appear to be used in luring potential prey. Attains 15 cm. Benthic, occurring in inshore waters at depths up to 60 m.

Nothing is known of the phylogenetic relationships of the taxa within the Brachionichthyidae.

Relationship of Brachionichthyidae to Other Antennarioidei

The hypothesized relationships of the Antennarioidei as presented by Pietsch (1981) and Pietsch and Grobecker (1987). For character states, click here: 1-3, 4-5, and 6-7.

The family Brachionichthyidae is classified as the basal sister taxon of a clade including the Lophichthyidae, Tetrabrachiidae, and Antennariidae; these four families forming the lophiiform suborder Antennarioidei (Pietsch, 1981; Pietsch and Grobecker, 1987). Monophyly of the suborder and the relationships within it are supported by a total of seven synapomorphies (see above cladogram):

Information on the reproduction of handfishes comes largely from monitoring programs of endangered or threatened species (Bruce et al., 1997; 1999). Spotted handfish (B. hirsutus) and red handfish (B. politus) spawn during September and October (Last and Bruce, 1997). Spawning in captivity is preceded by displays between male and female handfish consisting of a variety of fin and body movements. Fertilization is external. It is not known if a single or multiple males fertilize the eggs of individual females in the wild. Egg masses of 80-250 eggs are spawned on the bottom around an isolated semi-rigid vertical object. Spotted handfish most commonly attach their eggs masses to stalked sea squirts (Sycozoa sp.); red handfish utilize algae (Caulerpa sp.). Handfish eggs are large (approximately 3–4 mm in diameter), orange in color, housed in individual flask-shaped envelopes, and are interconnected in a single mass by a series of fine tubules and tendrils.

Spotted handfish hatch in November and grow rapidly to 35–50 mm SL by the first year, and to 70–80 mm SL the second year. After two years the growth rate slows to only a few millimeters annually. Females reach maturity after 2-3 years at a size of 75–80 mm SL; male size at maturity remains unknown, however, the smallest observed captive-spawning male was 87 mm TL.