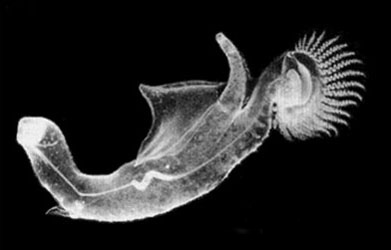 Cardiapoda placenta is the larger of the two species of Cardiapoda, achieving a maximal size of about 110 mm. Features that distinguish C. placenta from C. richardi include: numerous gills (>20) that form a median crest on the visceral nucleus, fin sucker in both males and females, a tail that terminates in 12 finger-like extensions that can be expanded and contracted, and a narrowly triangular eye shape.

A species of Cardiapoda with:

In-situ field observations of C. placenta by Ronald Gilmer (reported in Lalli and Gilmer, 1989) revealed that both sexes are brightly colored with reddish-brown spots covering the body, although the number and brightness of these spots are greater in females. The pigment spots were seen to be highly contractile, changing rapidly from 0.5 to 2 mm in diameter. Also, the terminal finger-like expansions on the tail varied from reddish-brown to black, and flashed during prey capture.

The feeding behavior of C. placenta was observed on 38 occasions by SCUBA divers in the Sargasso Sea and Florida Current (Hamner, et al., 1975). The most frequently encountered prey were salps. Attack of a prey item was seen once in the field and twice in aquaria (using hand-collected animals). In each case the prey's silhouette appeared to have been located visually from beneath by the upward-searching predators from as far away as 60 cm. In each case, the predator swam rapidly (up to 40 cm/sec) up to the prey and captured it with the buccal cones, followed by ingestion (taking about 10 min) using the radula and peristaltic movements of the proboscis.

Page: Tree of Life Cardiapoda placenta (Lesson 1830). Authored by Roger R. Seapy. The TEXT of this page is licensed under the Creative Commons Attribution License - Version 3.0. Note that images and other media featured on this page are each governed by their own license, and they may or may not be available for reuse. Click on an image or a media link to access the media data window, which provides the relevant licensing information. For the general terms and conditions of ToL material reuse and redistribution, please see the Tree of Life Copyright Policies.