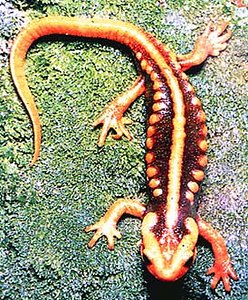 Phylogenetic relationships of salamanders based on combined molecular and morphological data (Wiens et al., 2005). Relationships of four extinct families (Batrachosauroididae, Karauridae, Prosirenidae and Scapherpetontidae) are unknown because fossil remains are not sufficient for a confident phylogenetic analysis (see Estes, 1981). Results of Frost et al. (2006) are congruent with this arrangement except that the Sirenidae is grouped with the Proteidae as the sister taxon to a clade comprising Ambystomatidae, Dicamptodontidae and Salamandridae.

Salamanders are amphibians of the order Caudata (also called Urodela). This taxon includes the newts, a group of rough-skinned species in the salamander family Salamandridae. Salamanders are distinguished from other amphibians (frogs and caecilians) most obviously by the presence of a tail in all larvae, juveniles and adults, and by having limbs set at right angles to the body with forelimbs and hindlimbs of approximately equal size (except in the family Sirenidae, which lacks hindlimbs). Salamanders are distinguished from frogs and caecilians also by numerous characteristics of their skeleton and musculature (see "Characteristics" below).

Many salamanders have a biphasic life cycle containing an aquatic larval form with external gills and a metamorphosed terrestrial adult form that breathes by lungs and/or through moist skin. Some species lack metamorphosis and retain a larval appearance throughout their life, whereas other species lack the aquatic larval stage and hatch on land as terrestrial forms that resemble miniature adults. The general association of lungs with terrestrial animals and gills with aquatic ones is not universally true among salamanders; terrestrial plethodontid salamanders lack lungs and breathe through the skin, whereas aquatic adult amphiumas lack gills and use lungs to breathe. Salamanders are carnivorous in the larval, juvenile and adult stages of their life cycles; they prey mainly on small arthropods.

Most salamanders are relatively small for vertebrates, usually less than 15 cm long, although the aquatic cryptobranchid salamanders of the genus Andrias may exceed 1.5 m in length.

Salamanders inhabit nearly all northern temperate regions of the world where moist and cool habitats occur. The greatest phylogenetic diversity of salamanders is in North America where representatives of 9 of the 10 extant taxonomic families occur. Lungless salamanders of the family Plethodontidae occur also in tropical areas of Central and South America. Terrestrial salamanders are usually found on the forest floor under rocks or logs, from which they emerge at night to feed. Aquatic forms live on the bottoms of streams or ponds, often under stones. Salamanders are usually seasonal in their activity and are easily found only during their active season, which differs among species.

Salamanders are unusual among animals in having very large amounts of DNA in their nuclear genomes (reviewed by Morescalchi, 1975; Larson, 1984; Raff and Kaufman, 1983:314). Genome size measured as C-value (mass of DNA in a haploid, unreplicated nucleus) ranges from approximately 15-90 pg. in salamanders (Morescalchi, 1975) and shows substantial variation within some genera, such as Plethodon; for comparison, the C-value for humans is approximately 3 pg. Much of this DNA is repetitive and may constitute retrotransposons (Marracci et al., 1996). Large genomes may limit rates of differentiation during development (Sessions and Larson, 1987).

In addition to presence of a tail and usually two pairs of limbs of approximately equal size, salamanders are distinguished from other amphibians by a combination of several technical features of the skeleton and musculature. These include (1) absence of an otic notch and middle ear, (2) presence of a large footplate and short stylus on the columella in most taxa, (3) absence of postorbital, postparietal, tabular, supratemporal, jugal, quadratojugal (present in Karauridae), supraoccipital, basioccipital and ectopterygoid bones, (4) presence of ribs, (5) presence of true teeth on both jaws, (6) gill slits and external gills in aquatic larvae (when present), (7) origin of the adductor mandibulae internus superficialis muscle on the top and back of the skull (except Karauridae) and small size of the levator mandibulae posterior. See Duellman and Trueb (1986) for further coverage of these characters.

A few Mesozoic fossil salamanders (genera Comonecturoides, Galverpeton and Hylaeobatrachus, each containing a single species) have not been assigned to taxonomic families or suborders.

See Frost (1985), Duellman and Trueb (1986) and Duellman (1993) for further information on classification of salamanders.

Monophyly of each of the 10 extant salamander families is well established. Evidence for monophyly of the families is discussed on the separate Tree of Life pages devoted to each family. The phylogenetic relationships among the different families of salamanders have been somewhat difficult to resolve (Larson, 1991; Larson and Dimmick, 1993; Larson et al., 2003). Larson and Dimmick (1993) investigated salamander relationships based on an analysis of 209 phylogenetically informative characters (177 from aligned ribosomal RNA sequences [both large and small subunit], 20 from structures of the head and trunk, and 12 from anatomy of the cloaca). Titus and Larson (1995) found further support for some of the relationships recovered by Larson and Dimmick's (1993) analysis using mitochondrial DNA (mtDNA) sequence data.

Gao and Shubin (2001) investigated higher-level salamander relationships using combined morphological and molecular (nuclear ribosomal RNA from Larson and Dimmick, 1993) data, placing three of four families comprised of paedomorphic species in a single clade. In contrast, previous phylogenies (e.g., Duellman and Trueb, 1986;  Larson and Dimmick, 1993) indicate that salamanders that retain at least some aquatic larval characteristics throughout life (families Amphiumidae, Cryptobranchidae, Proteidae, Sirenidae and parts of the Ambystomatidae and Plethodontidae) do not form a monophyletic group, and thus evolutionary displacement of larval characteristics into the adult phase of the life cycle must have occurred independently multiple times in salamanders.

Wiens et al. (2005) investigated higher-level salamander relationships using separate and combined parsimony and Bayesian analyses of new morphological and molecular data. Their morphological data consisted mostly of skeletal (n = 266) and external (n = 15) characters, along with literature studies of vertebral (Edwards, 1976), auditory (Lombard, 1977), and cloacal morphology (Sever, 1991), and literature-based characters of reproduction, larval morphology, and chromosome complement (e.g., Duellman and Trueb, 1986; Crawford and Wake, 1998). Their molecular data consisted of 1,742 characters: 212 ribosomal RNA characters from Larson (1991) and Larson and Dimmick (1993), plus 1,530 base pairs of nuclear recombination-activating gene 1 (RAG-1). They found that paedomorphic traits significantly confounded phylogenetic analysis of morphological data, and rejected the hypothesis that paedomorphic salamanders form a monophyletic group.  Their preferred hypothesis of salamander relationships (their Fig. 8, see tree above) was more similar to previous phylogenies (e.g., Larson and Dimmick, 1993) than to that of Gao and Shubin (2001).


Wiens et al. (2005) found strong support for monophyly of salamanders having internal fertilization of eggs (extant families of the suborder Salamandroidea, or, all salamanders except for sirenids, cryptobranchids, and hynobiids), a result supported by characters derived from cloacal anatomy (see Sever, 1991a, 1991b). Additional notable features of the Wiens et al. (2005) phylogeny include: 1) Rhyacotritonidae as the sister taxon of Amphiumidae , Plethodontidae; 2) monophyly of Proteidae (i. e., North American Necturus and European Proteus; and 3) the possibility of Cryptobranchoidea as the sister taxon to all other salamanders (rather than Sirenidae).  Although the preferred tree of Wiens et al. (2005; their Fig. 8) placed Proteidae as the sister taxon of (Salamandridae , (Dicamptodontidae , Ambystomatidae)), parsimony analyses provided support for a more basal placement of proteids, suggesting that additional data are needed to confidently place sirenids and proteids.

Weisrock et al. (2005) used ~2,100 base pairs of mitochondrial DNA sequence data to investigate higher-level salamander relationships. Parsimony analyses recovered monophyly of all families except Proteidae, but interfamilial relationships were not well supported (Weisrock et al., 2005). In contrast, model-based (Bayesian and maximum likelihood) methods yielded a topology concordant with the preferred tree of Wiens et al. (2005) based on nuclear rRNA sequences (Weisrock et al., 2005). Unlike Wiens et al. (2005) however, Weisrock et al. (2005) statistically rejected the monophyly of internally-fertilizing salamanders (suborder Salamandroidea). This result was likely due to the difficulty of inferring phylogeny when terminal branches are temporally long compared to internal branches deep in the phylogeny. Parsimony analysis of nuclear and mitochondrial DNA sequences by Frost et al. (2006) grouped Proteidae and Sirenidae as sister taxa; this result suggests that the perennibranchiate condition in these families might be homologous, but it contradicts monophyly of suborder Salamandroidea.

Crawford, A. J., and D. B. Wake. 1998. Phylogenetic and evolutionary perspectives on an engimatic organ: The balancer of larval caudate amphibians. Zoology 101:107?123.

Nussbaum, R. A. 1985. The evolution of parental care in salamanders. Miscellaneous Publications, Museum of Zoology, University of Michigan 169:1-50.

Sessions, S. K. and A. Larson. 1987. Developmental correlates of genome size in plethodontid salamanders and their implications for genome evolution. Evolution 41:1239-1251.

Sever, D. M. 1991a. Comparative anatomy and phylogeny of the cloacae of salamanders (Amphibia: Caudata). I. Evolution at the family level. Herpetologica 47:165-193.

Sever, D. M. 1991b. Comparative anatomy and phylogeny of the cloacae of salamanders (Amphibia: Caudata). II. Cryptobranchidae, Hynobiidae, and Sirenidae. Journal of Morphology 207:283-301.

Correspondence regarding this page should be directed to David Wake at