Three species are presently recognized in the family but more are known to exist:

Members of this family are small, muscular, midwater squids that occupy tropical to subtropical waters probably at depths of 500-1000m during the day and near-surface waters at night. The posterior end of the mantle is broadly rounded. The fins are peculiar: they consist of muscular pillars (fin ribs) connected by thin membranes giving the appearance of a comb (hence the family name). The fin extends nearly the full length of the mantle.

A number of undescribed species are present in this genus. Little is known of the biology of any species.

A member of the bathyteuthid families ...

Only a few species-level characters are known in Chtenopteryx. At present species are separated by (1) the maximum number of sucker series on the arms and tentacular clubs, (2) the presence/absence of photophores, (3) the size of the visceral photophore and (4) the mantle width relative to the ML. 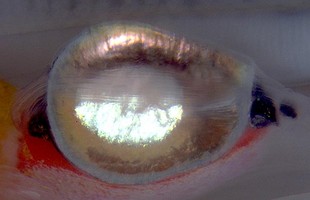 Many authors have spelled the genus name for this taxon "Ctenopteryx." However, Bello and Giannuzzi-Savelli (1993) documented that Appellof's original spelling (1890) was "Chtenopteryx." The spelling was changed by Joubin (1900) and this change was solidified as an emendation by Pfeffer (1900) who decided that the original spelling was in error because Appellof derived the generic name from the Greek words for "comb" and "wing." In addition to pointing out that Pfeffer's emendation was unjustified, Bello and Giannuzzi-Savelli (1993) noted that Guerra (1992) had found that the Pfeffer/Joubin spelling is a junior homonym of Ctenopteryx Flach, 1889, a coleopteran subgenus. Therefore, although Ctenopteryx may seem superficially to be the appropriate spelling for the squid genus, the actual correct spelling is Appellof's original. Bello and Giannuzzi-Savelli (1993) further petitioned the International Commission on Zoological Nomenclature (ICZN) to place the name Chtenopterygidae Grimpe, 1922 on the Official List of Family-Group Names in Zoology and to place the name Ctenopterygidae Grimpe, 1922 on the Official List of Rejected and Invalid Family-Group Names in Zoology as an incorrect original spelling. These recommendations were accepted in ICZN Opinion 1793 (ICZN, 1995).

Early paralarvae of Chtenopteryx spp. have distinctive tentacular clubs: Each club has a disc-shaped oral surface that is covered with suckers. Presumably some unusual, but unknown, function is associated with the odd shape of this club. 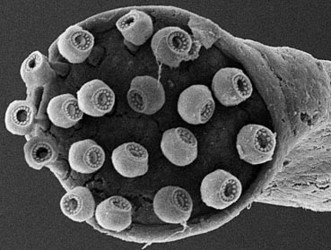 Figure. Left - Oral view of the club of a 2.9 mm paralarva of Chtenopteryx sp. from the central North Atlantic. Scanning electron micrograph by Johnas Wright, provided by M. Vecchione. Right - Ventral view of a paralarva of Chtenopteryx sp., ca. 2-3 mm ML, off Hawaii. The disc-like clubs appear white in the photograph and face one another. This is the same species as illustrated below. Photograph by R. Young.

Paralarvae of two species of Chtenopteryx have been recognized in Hawaiian waters that differ in the chromatophore pattern on the distal end of the club. The more common form is illustrated below. Note that the fin ribs can just be detected in the smaller paralarva but the characteristic fins, although short, are clearly apparent in the larger paralarva. A distinctive feature of this species is the arrangement of chromatophores on the distal, aboral surface of the tentacle (arrow in illustration below). 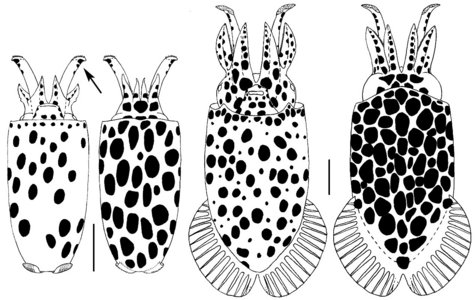 Males of some species possess a large photophore that lies within the shell sac. Chtenopteryx sp. in a shipboard aquarium has been observed to produce a brilliant luminescent flash but the source of the flash could not be determined (pers. obs.). This squid has been observed, in an aquarium, to adjust the intensity of light emited from its visceral photophore in response to changes in an overhead light (pers. obs.). This behavior is consistent with counterillumination (concealment via matching the downwelling light with bioluminescence) but the animal, in a horizontal attitude, did not conceal itself effectively as the head and posterior third of the body were relatively dark against the overhead light (ie, these regions cast shadows).

In Hawaiian waters relatively few captures were made during the daytime but they suggest that Chtenopteryx "sicula" occupies depths from about 600-1000 m while at night it migrates mostly into the upper 200m (Young, 1978). 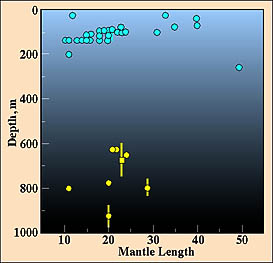 Species of Chtenopteryx are found throughout the tropical and subtropical waters of the world's oceans (Nesis, 1982).

Page: Tree of Life Chtenopterygidae Grimpe 1922. Chtenopteryx Appellof 1890. Combfin squid. Authored by Richard E. Young and Michael Vecchione. The TEXT of this page is licensed under the Creative Commons Attribution-NonCommercial License - Version 3.0. Note that images and other media featured on this page are each governed by their own license, and they may or may not be available for reuse. Click on an image or a media link to access the media data window, which provides the relevant licensing information. For the general terms and conditions of ToL material reuse and redistribution, please see the Tree of Life Copyright Policies.