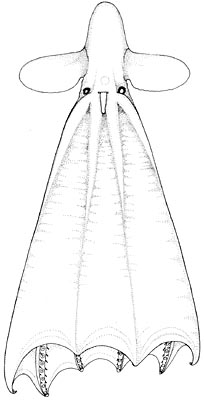 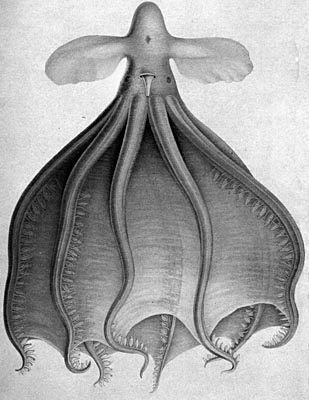 C. murrayi is virtually blind. The eye lacks a lens; the retina is reduced and continuous with a cornea. The eye is embedded within the gelatinous tissue of the head without connection to the surface. Nevertheless, the eye still functions as a simple photoreceptor that cannot form images (Aldred et al, 1983). This species is worldwide in distribution and occupies great depths primarily between 1500 and 4500 m (Nesis, 1982/87) although it has been captured at the surface in an ice hole in the Arctic Ocean (Aldred et al., 1983).

The above description is taken from Chun (1910) and Aldrich, et al. (1983). More details of the description can be found here.

The reduced suckers are still thought to provide suction but clearly by a somewhat different mechanism than typically seen in octopods. Contraction of the radial muscles near the center of a flat infundibulum that adheres to a surface, should provide suction. Aldred et al. (1983) suggest, however, that adhesion may arise from capillary action of the many minute tubes that make up the cuticle of the infundibulum and that this is especially effective in very deep-living octopods.