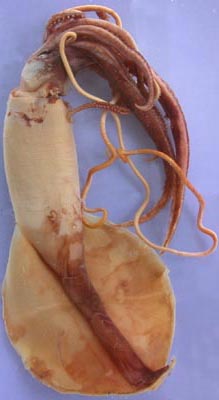 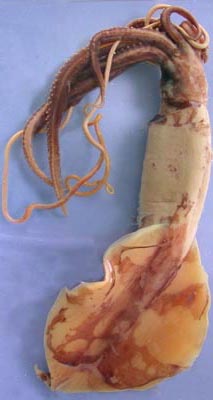 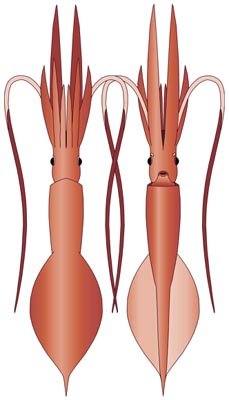 A member of the M. glaukopis Group with ...

At 5 mm ML  M. famelica paralarvae are separated from similar-sized paralarvae of Mastigoteuthis sp. A, the only other common mastigoteuthid in Hawaiian waters, by the more slender shape, smaller eyes, more anterior digestive gland and tentacular suckers and chromatophores extending much of the tentacle length. At 7 mm ML the absence of anterior fin lobes also distinguishes M. famelica. At larger sizes, the slender shape, elongate fins and, by at least  17 mm ML up to at least 40 mm ML, skin tubercules easily distinguish M. famelica. The differences between the two species diminish at sizes below 5 mm ML. The position of the digestive gland appears capable of distinguishing Mastigoteuthis sp. A to at least 3.5 mm ML although the smallest M. familica paralarva examined was 4.8 mm ML.

Small multicuspid tubercles on mantle, funnel, head and aboral surface of arms seen in young of 17 - 42 mm ML. Most of the head tubercules are not visible in the photograph at the right but some on the funnel and its enlargement are visible. 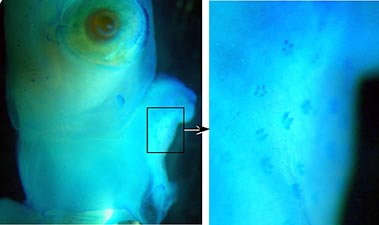 Type locality: Vicinity of Kauai Island, Hawaiian Islands. Known only from the central north Pacific Ocean to about 3°S. 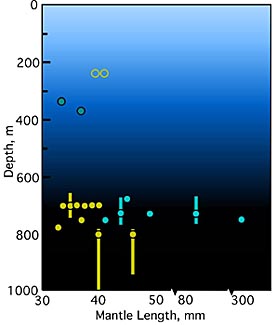