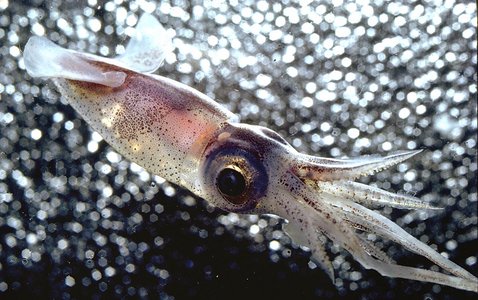 Enoploteuthid squid are small, between 3 and 13 cm in mantle length. All open-ocean species occupy upper mesopelagic waters during the day. In the regions where the mesopelagic zone intersects the slopes of land masses (i.e., the mesopelagic boundary zone) some species may occur at shallower depths. Many species are known to undergo extensive daily vertical migrations which may be characteristic of all species in the family. The species are noted for their colorful array of numerous photophores distributed primarily over the ventral surfaces of the head, arms, funnel and mantle.

A member of the enoploteuthid families ...

The following table compares characteristics of subadults for the genera of Enoploteuthidae.

A list of all nominal genera and species in the Enoploteuthidae can be found here. The list includes the current status and type species of all genera, and the current status, type repository and type locality of all species and all pertinent references.

Young and Bennett (1988) found strong similarities in photophore structure between Watasenia and Abraliopsis and between Abralia and Enoploteuthis. They did not, however, distinguish between plesiomorphic and apomorphic characters. Relationships, therefore, remain uncertain although the similarity between Watasenia and Abraliopsis is supported by the shared presence of several other characters (see respective pages).

Members of the family lack nidamental glands but have enlarged oviducal glands. Spawning females produce long gelatinous strings with eggs embedded in a single series. The eggs are about 1 mm long and oval to spherical in shape, depending on the species. Developing embryos are often found in plankton tows taken in tropical near-surface waters. The enoploteuthid eggs in the photo on the left, taken from a plankton tow, consist of two Abralia trigonura on the left (one with its jelly layer still somewhat intact), probably Abraliopsis sp. in the center and Enoploteuthis reticulata on the right. The latter is distinctive in having a pitted chorion which scatters the light giving a less transparent appearance. 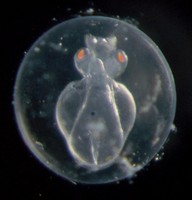 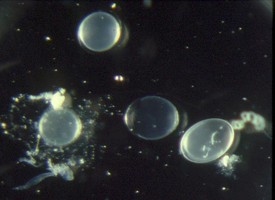 Figure. The advanced embryo on the left (photograph enlarged relative to that of the eggs on the right) shows the large internal yolk sac and a central black dot which is the developing ink sac. Enoploteuthid paralarvae are often the most abundant young cephalopods found in the near-surface plankton of tropical and subtropical seas (Young and Harman, 1985). Enoploteuthid eggs, off Hawaii. Abraliopsis sp. embryo, off Hawaii. Copyright © 1996, R. E. Young.

Correspondence regarding this page should be directed to Kotaro Tsuchiya at