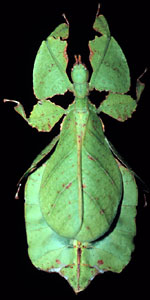 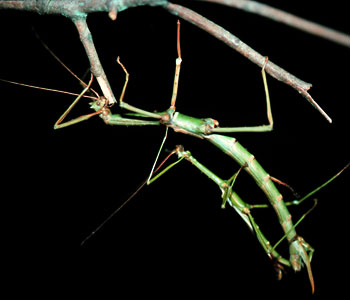 Euphasmida are commonly referred to as stick and leaf insects. Exquisitely camouflaged, many species look like twigs and may have the appearance of being covered by lichens, mold, bird feces, or moss. The leaf-like forms usually bear a striking resemblance to foliage, exhibiting leaf veins, mildew spots and even apparent insect feeding damage.

Their primary means of avoiding predators is crypsis. If discovered, they either play dead (catalepsy), or they try to scare the predator with a startle display which can include wing flashing, leg kicking, or spastic motion. Some species also release an irritating "tear gas-like" spray when disturbed (see Eisner et al. 1997). In addition, many Euphasmida can purposely lose some of their legs to help free them from a predator's grasp. If this occurs during the immature stages, they can regenerate the lost limbs during successive molts.

Compared to other insects, Euphasmida are large, and a few are gigantic. Several species measure over 200 mm in length (Brock 1999), and the worlds' largest extant terrestrial arthropod is the Euphasmida Phobaeticus serratipes, with one documented female measuring 555 mm (Seow-Choen 1995). Since Euphasmida are wonderful looking insects, relatively easy to rear in captivity, they are popular as pets and for displays at zoological gardens (Seiler et al. 2000).

Their tarsi possess five articles unlike Timema which have three. The cerci are simple being composed of one article. With the exception of the enigmatic genus Agathemera, Euphasmida possess some elongation of the body segments, and the mesothorax is usually elongated.

Euphasmida are hypothesized to be a monophyletic group because of several unique anatomical features they exhibit (Tilgner et al., 1999). For example:

Bradler (2000) hypothesized that the endemic South American genus Agathemera is the sister group to the remainder of Euphasmida. This hypothesis is supported by the fact that the ventral muscles of the abdomen of Agathemera span the length of each segment. Other characters suggest Agathemera is a basal taxon. For example, the salivary ducts form a tube that opens into the hypopharynx. This condition is rarely found in Euphasmida, where most species have the ducts separate, but it is characteristic of Timema. In addition, the mesothorax is not elongated.

Of the remaining Euphasmida, two putatively monophyletic groups can be recognized in Günther's (1953) classification. The first clade consists of the subfamily Aschiphasmatinae sensu Günther combined with Dajaca, a genus classified in the subfamily Pseudophasmatinae by Günther. Dajaca are wingless, but in all other respects typical Aschiphasmatinae. The second clade consists of the Phylliinae sensu Günther. The phylogenetic relationship of these two proposed monophyletic groups to the remainder of Euphasmida (both extinct and extant) is not known at this time.

The relationship of Electrobaculum gracilis and of the species of Pseudoperla to Agathemera and other Euphasmida is uncertain. These extinct species are similar to Agathemera in that their mesothorax is not elongated. Their abdominal musculature cannot be examined, however, making their placement ambiguous. The remaining extinct species have features indicating they belong to the clade with the remaining Euphasmida, but no obvious synapomorphies link them with any group of extant species.

Tilgner (2000) has recently provided a review of the Phasmida fossil record, and concluded that they are not an ancient clade of Insecta. The oldest Euphasmida fossils date to 49-44 million years ago. They are from Grube Messel (Darmstadt, Germany) and Clarno Nut Beds (Oregon, USA). Oligocene and Miocene fossils are known from Florissant shale (Colorado, USA), Baltic, and Dominican Republic amber. 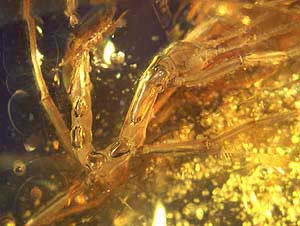 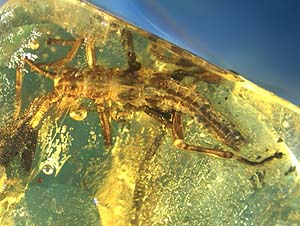 Euphasmida feed almost exclusively on the leaves of Angiosperms. Their phylogenetic and morphological diversification was probably due to an ability to exploit resources and new niches provided by these plants as they dominated terrestrial ecosystems during the later part of the Cretaceous Period and Cenozoic Era.

A stick insect is any Euphasmida that is tubular and has a greatly elongated body. Leaf insects are flattened and look like leaves. Many Euphasmida do not fit neatly into either the stick or leaf category, and it is best to refer to them simply as phasmids.

The author thanks Katja-Sabine Schulz and David R. Maddison for converting this page into the correct format for the Tree of Life. Tatiana Kiselyova kindly provided a review of this work.

Correspondence regarding this page should be directed to Erich Tilgner at