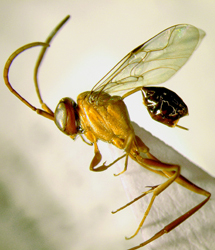 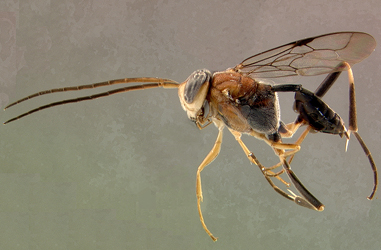 Wasps in the family Evaniidae have uniquely shaped metasomas with tubular petioles and shortened, laterally compressed metasomal segments 2-8 (Fig. 1). When alive these wasps often pump their metasomas up and down, earning them the common name of ensign or hatchet wasps. Because females oviposit into cockroach egg cases (oothecae) these wasps are commonly found in houses and other buildings. They can also be seen drinking nectar on flowers or searching through leaf litter for egg cases of native cockroaches. Currently the family is divided into 31 genera, 11 of which are represented only in the fossil record, and 455 species (20 of which are fossils) (Deans 2005).

Many shared, derived characters unite this group of wasps, and the family is unquestionably monophyletic. The unique metasomal morphology is the most apparant synapomorphy, but these wasps also share the following characters: 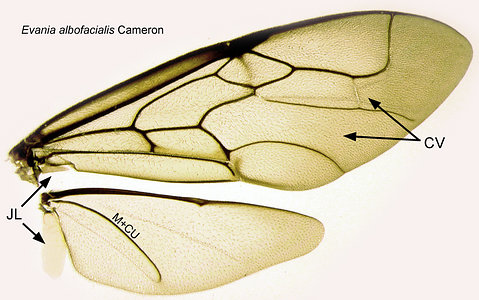 The life history is also considered to be a synapomorphy for the family. All published rearings indicate that these wasps develop as solitary egg predators within cockroach oothecae (Dictyoptera: Blattaria).

Most of our knowledge about evaniid development comes from research on two cosmopolitan species, Evania appendigaster L. and Prosevania fuscipes (Illiger), which specialize on the oothecae of pestiferous Periplaneta and Blatta cockroach species (Blattidae: Blattinae). There have also been some studies on evaniids native to Europe (Brachygaster minutus (Olivier) by Brown 1973; Zeuxevania splendidula (Costa) by Genieys 1922) and North America (Hyptia spp. by Edmunds 1954, 1952a).

A female ensign wasp will typically oviposit a single egg inside an ootheca. That egg will either be inserted into a cockroach egg (Brown 1973) or between the eggs (Edmunds 1952b), depending on the species. Behavioral studies suggest that some evaniids are capable of ovipositing into oothecae carried by the female cockroach (Roth 1989), and that others will not approach the ootheca until it has been deposited (Edmunds 1952b). Records also indicate that evaniid larvae develop solitarily (i.e., one larvae per ootheca; Edmunds 1953), and that species are apparantly somewhat specialized on certain host species (Deans et al. 2006; Deans 2005).  However, some researchers speculate that evaniids might actually specialize on oothecae of a certain size rather than a particular taxon (Deyrup and Atkinson 1993).

With hosts known for less than 4% of all described evaniid species, however, there are bound to be exceptional or otherwise unusual biologies. 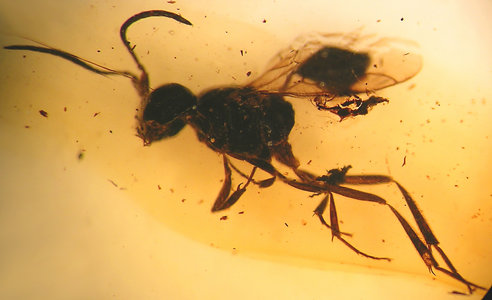 Until the early 1900s Evaniidae remained a "dumping ground" (Bradley 1908) for wasps with unusual morphological configurations, and the family was allied with or included such diverse lineages as: Aulacidae, Gasteruptiidae, Ichneumonoidea, Stephanidae, Monomachidae, Braconidae: Cenocoeliinae, Pelecinidae, Trigonalyidae, Megalyridae, and Roproniidae (Kieffer 1912, Bradley 1908). Hedicke (1939) defined the family to exclude these other lineages, and Basibuyuk et al. (2002) fine-tuned the definition of Evaniidae using characters from the extensive fossil record. Basibuyuk et al. synonymized the fossil family Cretevaniidae with Evaniidae, but their analyses could not resolve the placement of Andreneliidae (represented in the tree above as Andrenelia).

The relationships between extant ensign wasp genera have only recently been explored using modern phylogenetic methods (Deans et al., 2006), and more data are needed to fully resolve the evolutionary history of these wasps. The emerging picture, however, does indicate that the current generic classification is relatively robust, with the exception of two clades:

More host rearing records and phylogenetic data are required to understand the emerging pattern of host use, which seems to indicate that ensign wasps are "host" specific.

Basibuyuk, H. H., A. R. Rasnitsyn, M. G. Fitton, and D. L. J. Quicke. 2000b. An archaic new genus of Evaniidae (Insecta: Hymenoptera) and implications for the biology of ancestral evanioids. Bulletin of The Natural History Museum of London (Geology) 56: 53-58.

Deans, A. R. and M. Huben. 2003. Annotated key to the ensign wasp (Hymenoptera: Evaniidae) genera of the world, with descriptions of three new genera. Proceedings of the Entomological Society of Washington 105 (4): 859-875.

Edmunds, L. R. 1953. Collecting and culturing of native wood-roaches in Ohio, with some additional notes on their biology. Entomological News 64: 225-230.

Edmunds, L. R. 1954. A study of the biology and life history of Prosevania punctata (Brull?) with notes on additional species (Hymenoptera). Annals of the American Entomological Society 47 (4): 575-592.

Roth, L. M. 1989. Sliferia, a new ovoviviparous cockroach genus (Blattellidae) and the evolution of ovoviviparity in Blatteria (Dictyoptera). Proceedings of the Entomological Society of Washington 91 (3): 441-451.

Correspondence regarding this page should be directed to Andrew R. Deans at