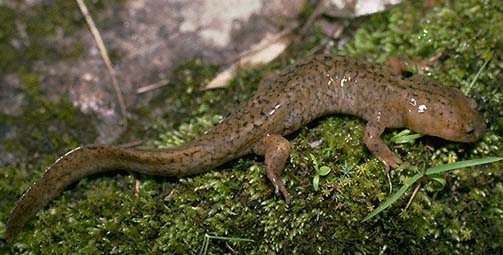 Relationships among the genera of the family Hynobiidae based upon a cladistic analysis of morphological characters (Zhao et al., 1988). The genus Pachyhynobius was not included in this analysis and its phylogenetic position relative to the other genera is uncertain.

Hynobiids have a biphasic life cycle with aquatic larvae and metamorphosed adults. Larvae have external gills, four pairs of gill slits and caudal fins. Metamorphosed adults are terrestrial during nonreproductive periods, except for the genera Batrachuperus, Liua, and Pachyhynobius, which live in water (Zhao et al., 1988). Metamorphosed adults have well-developed lungs except for the genus Onychodactylus, which is lungless. Hynobiids have external fertilization, an angular bone in the lower jaw, and large numbers of microchromosomes; these traits are considered ancestral for salamanders and have caused some authors to postulate that hynobiids resemble the most recent common ancestor of all salamanders more closely than do salamanders of the other families (Hecht and Edwards, 1977).

Hynobiids comprise the only family of salamanders whose current geographic distribution is entirely Asian. They are easily distinguished from other Asian salamanders which include rough-skinned newts (family Salamandridae) and giant, nonmetamorphic salamanders of the family Cryptobranchidae.

Eggs may be deposited in streams or ponds, varying among species. Eggs are laid in arc-shaped, gelatinous sacs and attached to stones or vegetation in the water, where they are fertilized. The number, size and arrangement of eggs in the gelatinous sacs vary among genera and are used as taxonomic characters for examining intergeneric relationships (Zhao et al., 1988).

Hynobiids are moderate-sized to small salamanders and have a biphasic life cycle with aquatic larvae and metamorphosed adults. Larvae have external gills, four pairs of gill slits, and a caudal fin; all of these characteristics are lost at metamorphosis, and eyelids are acquired. Eggs are laid in arc-shaped, gelatinous masses in water and their fertilization is external. Lungs are present and well developed except in the genus Onychodactylus, which has no lungs.

Detailed Characteristics of the Hynobiidae

Morphology of the Skull

The premaxilla may consist of separated, paired bones, or these bones may be fused to form a single premaxillary bone. Bilaterally paired nasal bones each ossify from 2 anlagen, one positioned medially and the other laterally on the skull; the paired nasal bones abut each other, partially bisected by short posterior processes of the premaxillae. Maxillary bones are present and usually well developed. Bilaterally paired septomaxillary bones are present. Lacrimal bone is present. Quadratojugal bone is absent. Pterygoid bone is absent. Internal carotid foramina are absent from parasphenoid bones. The angular bone is separated from the mandible. The columella and operculum appear as separate ear bones detached from the otic capsule in some species, whereas others lack the operculum. Replacement of vomerine teeth proceeds from the posterior of the vomer. Teeth have a distinct crown and pedicel. Origin of the levator mandibulae anterior superficialis muscle includes the exoccipital.

Characteristics of the Trunk and Vertebral Column

The scapula and coracoid bones of the pectoral girdle are fused to form the scapulocoracoid. Vertebral centra are amphicoelous. Ribs are unicapitate. Neural arches of vertebrae lack foramina, and spinal nerves exit intervertebrally. The pubotibialis and puboischiotibialis muscles are fused together. Anterior glomeruli of the kidney are reduced or absent.

The phylogeny presented here is derived from 23 morphological characters, 20 of which are phylogenetically informative (Zhao et al., 1988). This analysis included the genus Pachypalaminus, which has been synonymized with Hynobius, and omitted analysis of the genus Pachyhynobius. Because the number of characters studied is relatively small, these relationships should be considered tentative.

Todd Jackman and J. Robert Macey contributed to the preparation of this Tree of Life page.