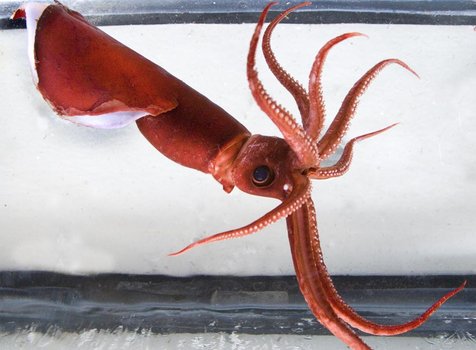 Mastigoteuthis sp. A is the most common species of the genus around the main Hawaiian Islands. It has numerous tiny photophores that lie beneath the outer layer of integumental chromatophores. The photophores are so small that they cannot be recognized as photophores without the aid of a microscope.

Scanning electron micrographs of the arm and tentacle suckers can be seen here.

More details of the description can be seen here.

We identify structures here as photophores on the basis of a dark, pigmented "cup" and a spherical, whitish "lens" and their distribution as a separate layer beneath most chromatophores. No bioluminescence has been observed or attempted to be observed. Mastigoteuthis sp. A is unique among members of the M. magna-group in having photophores. If the surface chromatophore layer is intact, the deeper lying photophores can be difficult to recognize even under a microscope. Mastigoteuthis sp. A also differs from M. magna in the more elongate shape of the posterior bulb of the funnel locking-apparatus, dentition of the arm suckers and details of the beaks.

Mastigoteuthis sp. A is most closely related to M. magna based on morphological evidence (see the M. magna-group page). Molecular data indicate substantial divergence across the three  genes examined (see Table below) and confirms that Mastigoteuthis sp. A is a separate species from M. magna. Hebert et al (2003) hypothesized a 2% rate of divergence in the COI locus as a general guideline for identifying distinct species, here the rate of divergence between M. microlucens and the morphologically similar M. magna was almost 10%.  The more morphologically distinct M. hjorti had a COI sequence divergence rate 12% with Mastigoteuthis sp. A, only slightly greater than that of M. magna which further emphasizes the surprising result of 10% difference seen with M. magna (Young, Lindgren and Vecchione, submitted) (see also the Discussion of Phylogenetic Relationships on the Mastigoteuthis page).

More details on the squid that provided the molecular data can be found here.

At 5 mm ML  Mastigoteuthis sp. A paralarvae are separated from similar-sized paralarvae of M. famelica, the only other common mastigoteuthid in Hawaiian waters, by the broader shape, larger eyes, more posterior digestive gland and tentacular suckers and chromatophores restricted to the distal end of the tentacle. At 7 mm ML the presence of anterior fin lobes also distinguishes Mastigoteuthis sp. A. At larger sizes, the slender shape, elongate fins and, by at least  17 mm ML, skin tubercules easily distinguish M. famelica. The differences between the two species diminish at sizes below 4.5 mm ML. The position of the digestive gland is useful to at least 3.5 mm ML. The smallest M. sp. A paralarva captured had a mantle length of 2.5 mm ML.

We have seen one mature male, 215 mm ML but no mature females. 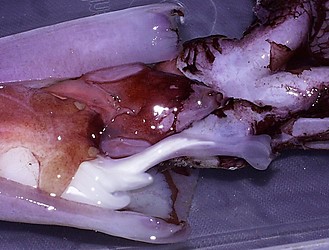 The vertical distribution of Mastigoteuthis sp. A in Hawaiian waters was examined by Young (1978). During the day most captures came from depths of 675-870 m; nighttime captures came from 255 to 725 m with most squid taken between 250 and 450 m. 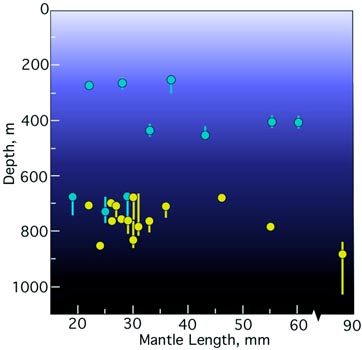