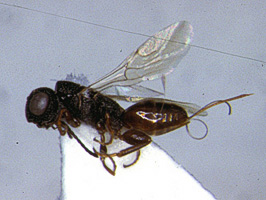 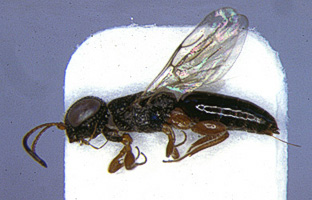 The family Megalyridae comprises eight known living genera and at least three extinct genera (Shaw 1990b). The family is particularly interesting because of its pantropical disjunct distribution pattern. Shaw (1990b) hypothesized that the family Megalyridae first evolved during the late Triassic period in tropical areas of the supercontinent Pangaea, and that the evolution of megalyrid lineages has been shaped by the processes of rifting and continental drift among the southern continents. Modern megalyrids are found mostly in areas of relict primary tropical forests. The main exceptions are some megalyrid species that live in southern temperate forests of Australia (Shaw 1990), South Africa (Waterston 1922; Hedqvist 1959; Shaw 1988), and Chile (Shaw 1987). The most abundant and species rich megalyrids appear to be the Australian species (Shaw 1990) apparently because they have adapted to dry conditions of Eucalyptus woodlands and Acacia scrub habitats (Froggatt 1906; Fahringer 1928; Shaw 1990). Another peak of diversity appears to be in the relict forests of Madagascar but most of these are still undescribed Dinapsis species (Hedqvist 1967; Shaw, unpublished data). There are a couple of remaining anomalies about the distribution of modern Megalyridae. There is still no explanation for why megalyrids are so rare in South America (Shaw 1987, 2003) or why they apparently have not dispersed into Central America. Despite extensive collecting of Hymenoptera in Costa Rica, no Megalyridae have been found in that country (Gauld and Hanson 1995). No Megalyridae have been found from India or Sulawezi although continental drift theory predicts that they should occur in those places (Shaw 1990b). Shaw (1990b) predicted that Megalyridae should be present in Java (Indonesia) and a new Ettchellsia was recently found there (Shaw, unpublished data).

Megalyrid wasps are thought to be idiobiont endoparasitoids of concealed insect larvae but the hosts of most genera and species are not known. The only detailed biological observations are for a few species of the genus Megalyra (Shaw 1990). The most common Australian species, Megalyra fasciipennis Westwood, parasitized large larvae of wood-boring Cerambycidae (Hacker 1913, 1915; Rodd 1951). One small Australian species, Megalyra troglodytes Naumann, attacks the larvae of mud-nesting Sphecidae on rock faces (Naumann 1983, 1987). The evolutionary transition from parasitism of wood-boring beetles to attacking aculeate wasp larvae is not as unusual as it first seems - the same behavior has also evolved several times in the family Ichneumonidae. It seems to evolve host shifts first from beetles in wood to wasps nesting in wood, then later transitions to wasps nesting in other situations.

The ovipostional behavior of Megalyridae is regarded as quite primitive, as compared with complex drilling skills evolved by Ichneumonidae and Braconidae. Megalyra fasciipennis begins the process by locating a frass-filled tunnel. The wasp positions herself so the ovipositor tip touches the frass-plug, then the ovipositor is slowly forced into the hole (Rodd 1951). Field observations suggest that megalyrid wasps simply poke their ovipositor into pre-existing cavities, holes, or cracks, rather than drilling into solid wood (Hacker 1913; Rodd 1951). This "hole-poking" behavior may provide a simple explanation for the transition from beetle larvae to wasp larvae in mud nests: the megalyrids are simply poking their ovipositors into a different kind of hole - wasp nest entrances rather than frass-filled beetle galleries. It should be noted that these biological observations are limited to a few species with comparatively quite long ovipositors. Many of the Neotropical, Afrotropical, and Oriental species, especially those in the genera Cryptalyra, Dinapsis, and Ettchellsia, have much shorter ovipositors. It seems unlikely that these species could either be attacking hosts deep in plant tissue or concealed inside nests. More likely they are attacking host insects very near the surface of plants or hosts that are not concealed, but the hosts for these megalyrids still remain a mystery.

The family name Megalyridae derives from the type-genus Megalyra and means literally "long ovipositor." Females of that genus have ovipositors ranging from five to eight times the body length - quite an impressive stinger for any wasp (Shaw 1990). But the name is a bit of a misnomer at the family-level since species of most other genera have ovipositors that are much shorter. Species of the genus Cryptalyra, as the name implies, have hidden ovipositors that barely protrude beyond the body (Shaw 2003). So although an impressive feature of a few species, the ovipositor characteristics are of little use in defining the whole family.

Historically there has been much confusion about the definition of this family. Species now placed in Megalyridae have in the past been classified into as many as six other families (Ichneumonidae, Braconidae, Evaniidae, Stephanidae, Dianapsidae, and Maimetshidae). This confusion probably mostly emerged from the fact that most of the characters historically used to recognize these wasps are symplesiomorphies, therefore are shared by several other wasp groups to which megalyrids are unrelated. Shaw (1988, 1990b) has provided a modern monophyletic definition for the family Megalyridae. The monophyly of the Megalyridae is evident by the following putative synapomorphies: (1) mesothoracic spiracle migrated into the upper corner of the pronotum and completely surrounded by pronotal cuticle, (2) hindwing venation greatly reduced, and (3) antenna with 12 flagellomeres. These characters are discussed at length by Shaw (1988). The significance of the "pronotal" spiracle was discovered by Gibson (1985) and expanded upon by Shaw (1988). Although quite tiny and easily overlooked, this microscopic feature is probably the most important single character for defining the family Megalyridae. It is quite unique to this family. The strongly reduced hindwing venation is much easier to see. There is some debate about whether the 12-segmented flagellum should be interpreted as a synapomorphy (see Shaw 1988) but it remains quite useful as an identifying feature for the family.

There are several characteristics of Megalyridae which do not constitute evidence for the monophyly of the family because they are plesiomorphic, yet are still useful (in combination) as identifying features. Most notable of these are the median mesoscutal sulcus (median groove on the anterior dorsum of the mesosoma), 3-toothed mandible, broad metasoma, axillae meeting at inner angles, subantennal grooves, and hind tibia with well-developed preening brushes. Perhaps the most useful of these characters is the subantennal grooves (the base of the antenna fits into a wide concave groove below the eye). This is a feature seen only in a few other primitive hymenopteran families (Orussidae and Stephanidae).

The Megalyridae is the sole family of the wasp superfamily Megalyroidea in modern classifications (Shaw 1988; Shaw 1990b). Another family, Dinapsidae, was proposed by Waterston (1922) for the South African genus Dinapsis. Brues (1923) described an extinct genus from Baltic amber, Prodinapsis, which he initially assigned to the family Dinapsidae. In the same paper, Professor Brues noted that the differences between Megalyridae and Dinapsidae were "very minor" and that it seemed doubtful that the Dinapsidae could be retained as a distinct family. After examining additional amber fossils, Brues (1933) decided to include both Prodinapsis and Dinapsis in the family Megalyridae. All subsequent authors have also included the dinapsines in the family Megalyridae, treating them either as a tribe (Hedqvist 1959; Shaw 1990b) or a subfamiy (Baltazar 1962; Raznitsyn 1977).

The arrangement presented here follows the results of Shaw (1990b). That study provided an analysis of twenty morphological characters for the eight living genera and three extinct genera of Megalyridae. If the fossil genera are excluded from the analysis, then a single fully-resolved minimum length cladogram is obtained. The rare Chilean genus Rigel is the basal sister-group to all remaining genera. The rare South African genus Megalyridea is also an isolated basal lineage, apparently the sister-group to the lineage comprising all remaining tribes (Prodinapsini, Dinapsini, Megalyrini, and Cryptalyrini). When the fossils are excluded, the tribe Dinapsini appears as the sister-group to the Megalyrini + Cryptalyrini. Including the fossils in the analysis makes it more difficult (because of missing data) to resolve the middle section of the cladogram (there were six equally parsimonious trees with the extinct genera included). Despite this difficulty it is worthwhile to include the fossil genera because they establish the Cretaceous age (at least) of the dinapsine lineage. It is interesting to note that two living genera (Rigel and Megalyridea) are more basal than any of the extinct fossil genera.

Gubson, G.A.P. 1985. Some pro-and mesothoracic structures important for phylogenetic analysis of Hymenoptera, with review of terms used for the structures. The Canadian Entomologist 117:1395-1443.

Shaw, S. R. 1988. Carminator, a new genus of Megalyridae (Hymenoptera) from the Oriental and Australian regions, with a commentary on the definition of the family. Systematic Entomology 13:101-113.

Shaw, S. R. 1990a. A taxonomic revision of the long-tailed wasps of the genus Megalyra Westwood (Hymenoptera: Megalyridae). Invertebrate Taxonomy 3:1000-1052.