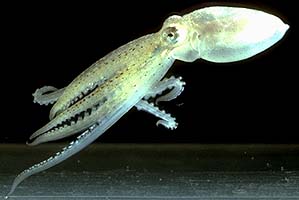 Octopods have rather short, compact bodies and only eight arms; no trace of the missing second arm pair remains even during embryonic development. Many species are benthic (bottom-living) and crawl over the ocean floor with the mouth facing the substratum. Others alternate between a benthic and a pelagic (free-swimming) habitat and some species are completely pelagic. The two suborders of Octopoda are very different in appearance but there is little doubt that it is a natural group as the monophyly of the Octopoda is supported by a large variety of characters. The Cirrata is a group of deep-sea octopods commonly known as the "finned octopods" due to their large, wing-like fins. The Incirrata contain the common (benthic), shallow-water octopods as well as many deep-sea benthic and pelagic species.

The monophyly of both suborders is well established. Young and Vecchione (1996) found two apomorphic character states that defined the monophyly of the Incirrata:

Another character can probably be added to the list of apomorphies although it hasn't been included in a cladistic study:

Young and Vecchione (1996) found three character states that defined the monophyly of the Cirrata:

Voight (1997) also found morphological, cladistic support for the Cirrata and Incirrata but her study is controversial. Carlini (1998) found molecular analyses supported the monophyly of both groups.