This species is easily separated from the only other north Pacific species (O. nielseni) by the presence of one rather than two large tail photophores. 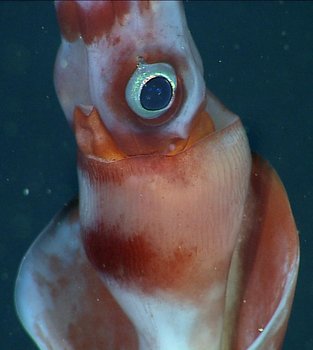 Most photophores are embedded in tissue and are difficult to see.

Strong developmental changes occur between ca. 30-40 mm ML that include large changes in eye size, thickness of arms and body, and increases in pigmentation. This is, presumably the transition from the juvenile to the subadult stage. Squid of nearly the same size at this critical stage, therefore, can look like different species. In large specimens, the tail becomes prominent. 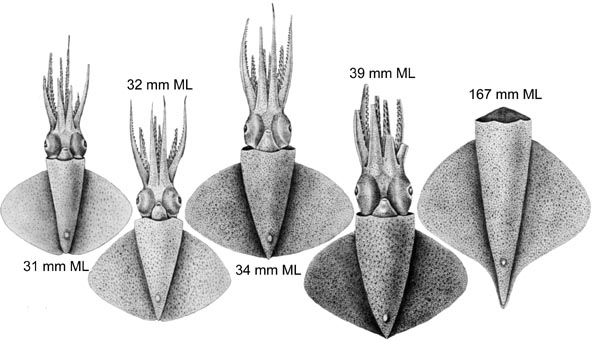 Figure. Ventral views of O. deletron. Left - Four drawings show the marked changes that occur between 30-40 mm ML. Right - The mantle and fins of a large squid showing the distinct tail at this size. Drawings from Young (1972).

Mature males lack a hectocotylus but have a large penis that, apparently, can extend well beyond the mantle opening. Mature eggs are about 2 mm in diameter (Young, 1972). Paralarvae have not been described.

O. deletron exhibits an unusual defensive behavior known as attack autotomy which was described in detail by S. Bush (2012). The following is extracted from her study. This squid can autotomize an arm leaving a wiggling arm with a flashing photophore in the grasp of a predator. However, for autotomy to occur traction must be involved. That is, only if the arm is securely attached to the predator, will the squid autotomize the arm. This behavior is often part of a sudden attack on the predator followed by a quick retreat. The combination of the behaviors, attack autotomy, is exhibited by only a few other animals, and no other squid (Bush, 2012). The defensive attack behavior, recorded insitu by an MBARI ROV (and part of Bush's study) is seen below:

1.  The squid, already on alert by the presence of the ROV, backs into the steel arm of the ROV (arrow). The bottle-brush attached to the arm ROV used to prod squid in various experiments.
2. The squid darts forward with arm-tip photophores lit-up as it splays its arms laterally.
3. The squid abruptly turns back toward its aggressor (the ROV steel arm).
4. With arms still spread and photophores shining, the squid attempts to grasp the steel arm.
5. The attack quickly terminates and the squid darts away. 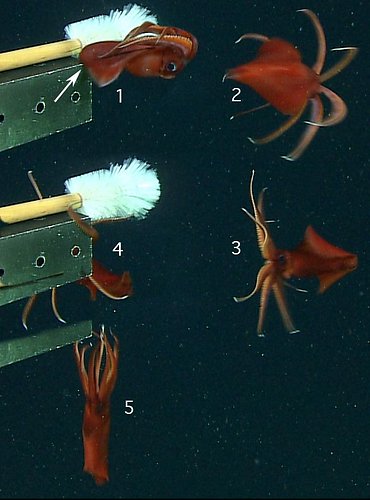 A video of this sequence can be seen here.

In this case, no arm was autotomized, presumably because the squid's hooks could not get a firm hold on the smooth, steel arm and therefore the steel arm could provide no traction for autotomy.

There are two common ways for a squid to control the emission of bioluminescent light: 1) by triggering the photocytes to turn luminesce on or off, or 2) by using a chromatophore shutter over the already luminescing photocytes. O. deletron appears to use the latter for controlling the light emitted by the tips of the arm photophores in some circumstances. This behavior described as "Arm-tip Chromatophores Contracted/Expanded" by Bush et al. (2009) is when the arm-tip photophores flash at variable rates and not together. The function of this behavior is unknown.

Figure. Control of arm-tip photophores through the use of chromatophore screening in O. deletron. The arrows follow one arm tip from nearly completely covered photophore to a nearly fully exposured luminescing photophore. Figures are from individual video frames taken in situ at 645 m depth by an MBARI ROV. Photographs © 2013 MBARI.

A video of this sequence can be seen here.

Type locality: Eastern North Pacific at 33°15'N, 118°37'W (off Southern California). This species is found from off Baja California to Alaska, off Northern Peru and possibly off Eastern Honshu (Nesis, 1982/87).

Page: Tree of Life Octopoteuthis deletron Young 1972. Authored by Richard E. Young. The TEXT of this page is licensed under the Creative Commons Attribution-NonCommercial License - Version 3.0. Note that images and other media featured on this page are each governed by their own license, and they may or may not be available for reuse. Click on an image or a media link to access the media data window, which provides the relevant licensing information. For the general terms and conditions of ToL material reuse and redistribution, please see the Tree of Life Copyright Policies.