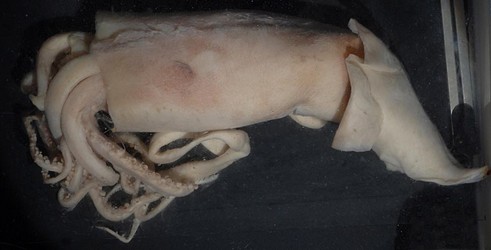 Wakabayashi et al. (2007) found a paralarval Onykia near Hawaii that could not be assigned to any know species of the genus from the North Pacific based on molecular analysis of the COI gene. Therefore, we suspect that Onykia sp. A, found commonly in Hawaiian waters but known primarily from paralarvae, is a new species. A nearly mature female taken from the stomach of a sword fish with a small size further supports this possibility.

The following information is from the nearly mature female (272 mm ML, see title photograph) taken, partly digested, from the stomach of a swordfish.

The paralarvae of Onykia sp. A  (Figs. A-C below) are easily distinguished from other squid paralarvae in Hawaiian waters: They are broad and have a characteristic line of large dorsal mantle chromatophores whose widths generally increase posteriorly. Small paralarvae often are observed in preserved samples with the head mostly withdrawn into the mantle cavity as shown in Fig. A. 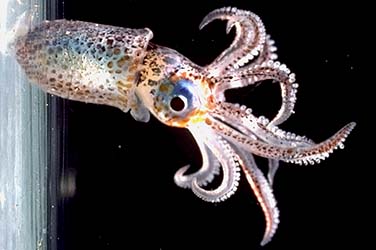 Figure. Side view of a juvenile (about 1 cm ML) of Onykia sp. A in a shipboard aquarium. Photograph by R. Young.

Wakabayashi, T., T. Kubodera, M. Sakai, T. Ichii, and S. Chow. 2007. Molecular evidence for synonymy of the genera Moroteuthis and Onykia and identification of their paralarvae from northern Hawaiian waters. Journal of the Marine Biological Association of the UK, 87: 959-965.

Page: Tree of Life Onykia sp. A. The TEXT of this page is licensed under the Creative Commons Attribution-NonCommercial License - Version 3.0. Note that images and other media featured on this page are each governed by their own license, and they may or may not be available for reuse. Click on an image or a media link to access the media data window, which provides the relevant licensing information. For the general terms and conditions of ToL material reuse and redistribution, please see the Tree of Life Copyright Policies.