A diverse group of fungi, including rusts, yeasts, smut-like and jelly-like fungi 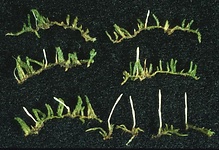 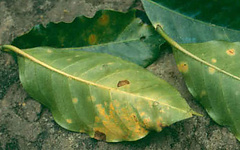 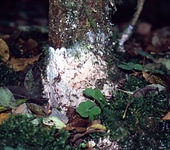 Members of the class Urediniomycetes are remarkably diverse, possessing a wide range of structural and ecological characters. One characteristic many of these fungi have in common, however, is their rather miniscule size, making them challenging to locate and study. The apparent lack of unifying structural features of many members of the Urediniomycetes has presented a challenge to understanding their phylogenetic affiliations, and the relationships of many of these disparate taxa have been illuminated since 1995 through the acquisition of molecular sequence, biochemical and subcellular data.

The class contains approximately 7,400 species, distributed among approximately 215 genera, but will eventually be much larger as many cryptic species are recognized. More than 95% of the species and 75% of the genera in this class are placed in the Uredinales, the plant parasitic rust fungi. The next largest orders, Septobasidiales and Microbotryales, collectively constitute approximately 5% of the species and 4% of the genera. Nearly 20% of the rust genera and 60% of the nonrust genera are monotypic (containing only one species). The rust fungi and several of the yeasts have been more extensively studied than have other taxa, and the surprisingly large percentage of monotypic genera may be artificially high due to the limited research on these often obscure fungi.

The rusts are undeniably the most economically important fungi in this clade, as obligate parasites on a wide range of crop plants including cereal grains, legumes, and trees such as coffee, apple, and pine, where they can cause extensive reduction in yield and even host death. Other phytopathogenic Urediniomycetes can be of economic importance, but on a much smaller scale than rust fungi. Species of Helicobasidium cause root rot diseases of many economically important plants such as asparagus, beet, mulberry, and pear. Microbotryum violaceum causes anther smut of plants in the Caryophyllaceae, while smut on buckwheat is caused by Sphacelotheca fagopyri. These smuts are not closely related to the smuts in the Ustilaginomycetes with which they were confused until molecular sequence data became available.

Correspondence regarding this page should be directed to Elizabeth M. Frieders at