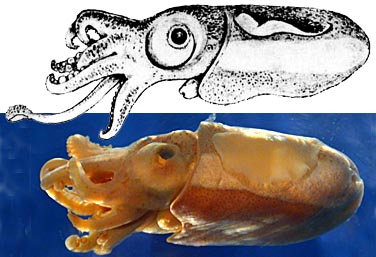 Sepiolina nipponensis is a peculiar sepiolid whose characteristics place it between the Heteroteuthinae and the Sepiolinae. The tentacular club with a normal keel is similar to that of the Sepiolinae while the silvery sides, ventral shield and large visceral photophore are similar to those of the Heteroteuthinae. A better understanding of the features and habits of this species should greatly aid our understanding of the evolution within the family.

Sasaki, M. 1929. A Monograph of the Dibranchiate Cephalopods of the Japanese and Adjacent Waters. Journal of the College of Agriculture, Hokkaido Imperial University, 20(supplement):357 pages.