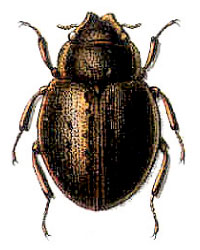 The smallest of the Hydrophiloid families with less than twenty species in a single genus, Spercheidae is notable for being perhaps the only filter-feeders among the Coleoptera. Spercheids are primarily found in the Old World, although at least two species are known from South America.

Correspondence regarding this page should be directed to Andrew Short at