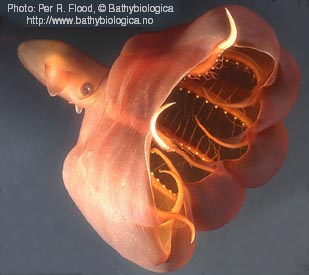 A single genus and two species are currently recognized in the family. However similar octopods from outside the Atlantic Ocean have not been critically examined.

Stauroteuthids are peculiar, gelatinous cirrates with a mantle opening that forms a complete tube around the funnel. They also have peculiar gills and internal shells and a large web that is nearly equally developed between all arms. When observed from submersibles, this octopod commonly has its arms and web formed into a bell-shape (bell-shape posture). Sometimes when the octopod is disturbed, it will inflate the web and draw the arms together at their tips to form a "balloon" with the arms and web (balloon posture). These postures are thought to be involved in feeding and/or defense (Vecchione and Young, 1997).

One of the most unusual features of the family is the cyclindrical, muscular mantle opening. Stauroteuthis spp. are the only cirrates in which the free edges of the mantle fuse dorsally to form a tube. The two photos taken at the right in a aquarium show the tubular opening in one stage of contraction. The opening appears like an elevated ring around the base of the slender, protruding funnel. Judging from preserved octopods (see drawing below), this ring can be greatly extended. In other octopods, the mantle attaches anteriorly, on either side, to the cephalic cartilage; as a result the dorsal wall of the mantle cavity, in this region, consists of the head.

Figure. Lateral views of the head and mantle of S. syrtensis, alive. Video frames from a video taken by Edith Widder of the octopod in a planktonkreissel.

Figure. Twisting dorsolateral view of the anterior mantle of S. syrtensis showing the intertwining muscles that form the dorsal wall of the mantle at its anterior end. In this preserved octopod, the anterior mantle was contracted into a tube that, at first, appeared to be the funnel. The true funnel was withdrawn inside of the mantle cavity. The mantle opening, in this drawing, is colored purple and is at the lower right of the drawing. The skin has been removed showing the mantle muscles. Beneath the dorsal mantle muscles, the dark violet lining of the mantle cavity is seen.

The two species are separated geographically (see below) but are very similar morphologically. Separation relies primarily on the differences in size and position of the suckers as seen in the following table:

Submersible observations have been made on S. syrtensis and we assume that they apply to both species. S. syrtensis is commonly seen, when first approached, with the web inflated into a bell-shape (below left) with the arms separated from the primary web by the secondary web. A ballooning posture is occasionally seen (below right), usually following disturbance, in which the web is extremely inflated and closed at the arm tips.

Locomotion is via movement of the fins or the expulsion of water from the web. The latter method, however, is weak perhaps because of the loss of the strong connection of the web to the arms due to the presence of the secondary web. Small copepods have been found in the stomachs. This and the presence of large secretory lip glands suggest that mucous may be involved in the capture of prey. The above is summarized from Vecchione and Young, 1997.

Johnsen, et al. (1999) found that mechanical stimulation induced luminescence associated with the basal suckers of S. syrtensis (sex unknown). This is the only known case of bioluminescence in cirrate octopods and suggests that careful observations of living material may be useful. The function of the luminescence is unknown.

Figure. Left - Oral view of bioluminescence of S. syrtensis. Right - Oblique-oral view to show arrangement of suckers for comparison with Left photograph. Photographs by P. Flood who writes, "The bioluminescence was stimulated by brief electrical AC pulses from a 12V power supply unit. The bioluminescent suckers lit up one after the other in perfect succession from mouth to periphery when stimulated near the mouth area. They were never seen to flicker independent of their neighbours in the same row.

Presently stauroteuthids are known only from the Atlantic Ocean. They are thought to be benthopelagic in distribution (Colling and Henriques, 2000). That is, they are pelagic but reside in close proximity to the ocean floor.