Temporary Page
This is an archived version of a Tree of Life page. For up-to-date information, please refer to the current version of this page. 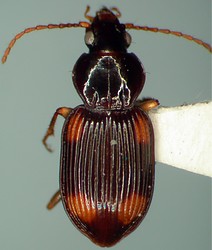 Abacetini is a group of probably more than 500 species for which there is little modern synthesis or taxonomic revision. The group is distributed throughout Africa and into southern Europe, across tropical and subtropical Asia and into the Pacific as far as northern Australia.

A broad set of taxa have been informally associated with Abacetus based on the combination of the lack of the angular base of stria 1; a single pair of deeply impressed, linear basal impressions of the pronotum; a single or no dorsal puncture on the third elytral interval; the basal elytral puncture at or near stria two and males with symmetrically expanded protarsomeres. Additionally, nearly all of these taxa have deeply impressed, elongate frontal impressions on the head; sinuate anterior coxal sulcus and coiled spermatheca.The most obvious characteristic and likely synapomorphy for a possibly dervied clade (Abacetini s.str.) is the eccentrically inserted second antennomere and, perhaps, the strongly transverse mentum. The mentum form, however, is somewhat variable. DNA sequence data also supports this clade based on a selected set of exemplars and several gene loci (K.Will unpublished).

Correspondence regarding this page should be directed to Kipling Will at