A. veranyi is the sole member of the subgenus Asteroteuthis. It is one of the more widely distributed Abralia species in the Atlantic Ocean. 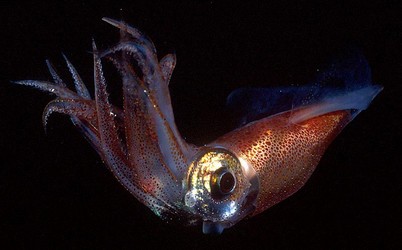 Figure. Anterolateral view of A. veranyi. Photograph by M. Vecchione.

This species was originally described from the Mediterranean Sea. It is the most widely distributed member of the Atlantic Abralia species associated with the distant-neritic waters. Distribution, were known, is from the northern Sargasso Sea to Bear Seamount, Bahama Islands and northern Brasil in the West Atlantic, and south off France to Benguella water in the East Atlantic.