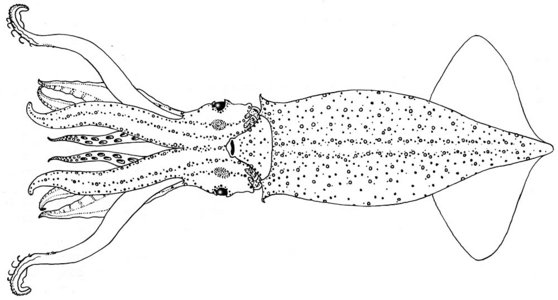 A. astrosticta is a relatively large species in the genus attaining 70mm DML.  This species is a component of mesopelagic boundary community in Hawaiian waters (Reid et al., 1991).

Paralarva of present species is characterized by: 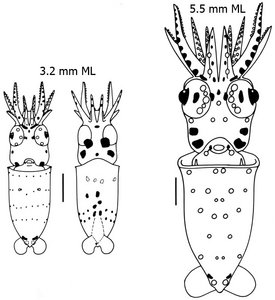 Figure. Ventral and dorsal views of A. astrosticta, Hawaiian waters. Scale bar is 1 mm. Note that the caudal photophores are detectable in both paralarvae. Drawings from Young and Harman (1985

A. astrosticta is a member of the mesopelagic boundary community in Hawaiian waters (Reid et al., 1991; Young, 1995). Adult specimens were caught at the bottom in 110 and 180m in Hawaii by gillnet and shrimp trawl. Juveniles were caught between 10 and 130m deep at night near Hawaii by pelagic trawls (Young, 1978).

Drawing from Burgess (1991, p. 131, Fig. 5B) printed with the Permission of the Bulletin of Marine Science.

Page: Tree of Life Abralia astrosticta Berry 1909. Authored by Kotaro Tsuchiya and Richard E. Young. The TEXT of this page is licensed under the Creative Commons Attribution-NonCommercial License - Version 3.0. Note that images and other media featured on this page are each governed by their own license, and they may or may not be available for reuse. Click on an image or a media link to access the media data window, which provides the relevant licensing information. For the general terms and conditions of ToL material reuse and redistribution, please see the Tree of Life Copyright Policies.