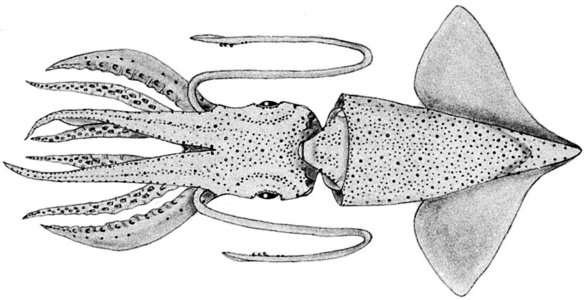 A. heminuchalis is a small sized species, less than 40mm DML, found in the tropical  Pacific. It is very similar to A. siedleckyi from off South Africa and may prove to be a junior synonym of the latter. It is characterized by its proportionally short, robust mantle and a photophore arrangement on the ventral head and mantle in which large photophores have a space surrounding each organ.

Burgess, L.A. 1992. Squids of the genus Abralia (Cephalopoda) from the central equatorial Pacific with a description of Abralia heminuchalis, new species. Bulletin of Marine Science, 49(1-2):113-136.

Hidaka, K. and T. Kubodera. 2000. Squids of the genus Abralia (Cephalopoda: Enoploteuthidae) from the western tropical Pacific with a description of Abralia omiae, a new species. Bulletin of Marine Science, 66(2):417-443.

Drawings from Burgess (1991) printed with the Permission of the Bulletin of Marine Science.

Page: Tree of Life Abralia heminuchalis Burgess 1992. Authored by Kotaro Tsuchiya and Richard E. Young. The TEXT of this page is licensed under the Creative Commons Attribution-NonCommercial License - Version 3.0. Note that images and other media featured on this page are each governed by their own license, and they may or may not be available for reuse. Click on an image or a media link to access the media data window, which provides the relevant licensing information. For the general terms and conditions of ToL material reuse and redistribution, please see the Tree of Life Copyright Policies.