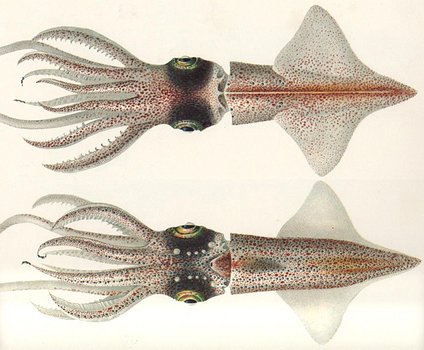 A. chuni was originally based on the illustrations of an enoploteuthid squid (39 mm ML, mature female) from the Indian Ocean, North Equatorial Current, in Chun (1910). While the specimen illustrated has been located and designated as the lectotype, no adequate description has been published.

Abraliopsis chuni is probably a member of the subgenus Pfefferiteuthis. It shares having a carpal flap and large keel on the tentacular club with Abraliopsis species P, V and affinis. The latter differs with its restricted distribution (Eastern Tropical Pacific) and its distinctive mantle photophore pattern.  Insufficient information is known to determine how similar it is to the other two species. See the A. (Pfefferiteuthis) page for a comparison of species in the subgenus. At present identification of A. chuni is based on its location in the Indian Ocean.

Chun (1910) redescribed Abraliopsis morisii (Vérany, 1839) from Atlantic and Indian Ocean specimens. The illustrations accompanying the text clearly show that more than one species was included in the description. Subsequently, Nesis (1982) named, on the basis of these illustrations, two new species of Abraliopsis (i.e., A. atlantica and A. chuni). More recently, the squids that were illustrated were located and designated as  lectotypes of their respective species (Glaubrecht. and Salcedo-Vargas, 2000).

The only reliable record is that of the type specimen from the Indian Ocean, North Equatorial Current, 1°49'N, 45°29'E.

Young, R.E. 1972. The systematics and areal distribution of pelagic cephalopods from the sea off southern California. Smithsonian Contribution to Zoology, 97:1-159.