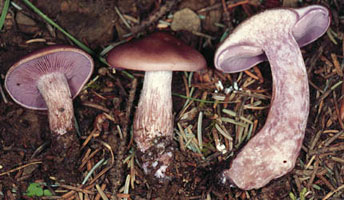 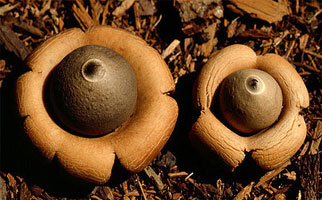 close box
This tree is based on several analyses of ribosomal DNA sequences (Hibbett and Thorn 2001; Hibbett and Binder 2002; Larsson 2002). Most of the clades shown are strongly supported, but relationships among the clades are not well resolved. The monophyly of the Homobasidiomycetes and its separation from the Auriculariales are also controversial.
Containing group: Hymenomycetes

Fruiting bodies of Homobasidiomycetes range from millimeter-scale cyphelloid forms, which look like tiny cups, to the giant polypores Rigidoporus ulmarius (up to 316 kg; see the Fungi page) and Bridgeoporus nobilissimus (up to 130 kg; Burdsall et al. 1996). Homobasidiomycetes include not only the largest fruiting bodies in Fungi, but perhaps the largest and oldest individuals in any group of organisms. Clones of the honey mushroom, Armillaria gallica, produce average-sized mushrooms, but their mycelial networks have been estimated to cover areas up to 15 hectares, with a mass of 10,000 kg (comparable to a blue whale), and an age of 1500 years (Smith et al. 1992).

Homobasidiomycetes function as decayers, pathogens, parasites, and mutualistic symbionts of both plants and animals. They make their broadest ecological impacts through their activities as wood-decayers and ectomycorrhizal symbionts of forest trees (such as pines, oaks, dipterocarps, and eucalypts; Rayner and Boddy 1988; Smith and Read 1997). Homobasidiomycetes are widespread in virtually all terrestrial ecosystems, and a few have secondarily returned to aquatic habitats.

The majority of edible mushrooms are Homobasidiomycetes (truffles and morels are in the Ascomycota, however). Cultivated edible Homobasidiomycetes are decayers that have been domesticated, such as button mushrooms (Agaricus bisporus), shiitake (Lentinula edodes), oyster mushrooms (Pleurotus ostreatus), and others. Most of the wild-collected edible species are mycorrhizal (making them difficult or impossible to cultivate), such as porcini (Boletus edulis), chanterelles (Cantharellus cibarius), and matsutake (Tricholoma matsutake). Would-be mushroom hunters should be aware that some species of Homobasidiomycetes produce secondary metabolites that render them toxic or hallucinogenic (or bioluminescent; Fig. 1).

Mushrooms have been used for medicinal and spiritual purposes in diverse human societies. For example, the 5300-year-old Ice Man who was discovered in a Tyrolean glacier was found carrying pieces of the birch polypore, Piptoporus betulinus, which he may have been using to treat intestinal parasites (Capasso 1998). Another fascinating item of ethnomycology comes from the Pacific Northwest of the United States, where Indigenous People have carved figurines out of the fruiting bodies of the polypore Fomitopsis officinalis to serve as guardians at the graves of shamans (Fig. 1; Blanchette et al. 1992). 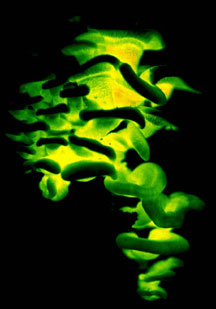 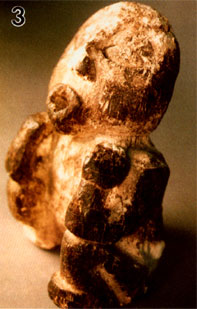 The generalized life cycle described and illustrated on the Basidiomycota page applies to Homobasidiomycetes. These fungi are almost always filamentous, without yeast phases. However, yeasts are produced by some homobasidiomycetes that are cultivated in underground fungus gardens by attine "leaf-cutter" ants in the neotropics (Mueller et al. 1998). In filamentous forms the hyphae are divided by septa, which are penetrated by a barrel-shaped dolipore that is flanked by membrane-bound parenthesomes (see the Hymenomycetes page for an illustration of septal structure). The dominant stage in the life cycle is typically a dikaryotic mycelium (binucleate, with two haploid nuclei derived from mating), but stable diploids have been reported in Armillaria (Anderson 1983). Dikaryotic and monokaryotic mycelia have been shown to produce asexual spores in some species (Miller 1971; Nakasone 1990), but asexual forms are apparently not as widespread as in the Ascomycota.

Mushrooms are multicellular fruiting bodies produced under favorable conditions by dikaryotic mycelia. Sometimes, mushrooms are produced at the periphery of a circular mycelium, resulting in a fairy ring (Fig. 2). Fairy rings indicate the spatial extent of the mycelium, which is otherwise difficult to establish. 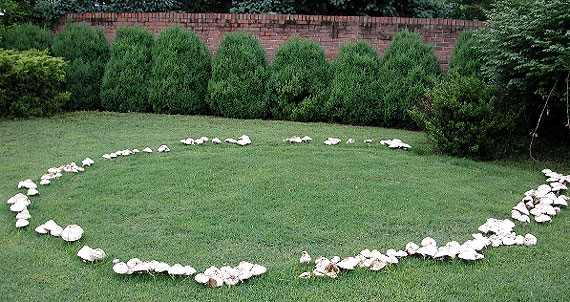 Nuclear fusion (karyogamy) and meiosis occur in basidia, which are formed in a layer of cells called the hymenium. Frequently, there are specialized non-reproductive cells called cystidia in the hymenium. Cystidia and other anatomical features of mushrooms provide many characters used in Homobasidiomycete taxonomy (Cl?men?on 1997; Donk 1964; Singer 1986).

Two to eight basidiospores (meiospores) are formed on each basidium—the most common number of spores is four. Most textbook illustrations of spore production in Homobasidiomycetes show four meiotic products migrating into four spores, leaving behind an empty basidium. The actual events of basidiosporogenesis are more complicated, however (Fig. 3). Basidiosporogenesis usually involves a post-meiotic mitosis, yielding eight haploid nuclei (as in Ascomycota). The post-meiotic mitosis may occur in the basidia, spores, or sterigmata (the stalks on which the spores are produced). If it occurs in the spores, then there may or may not be a back-migration of the "extra" nuclei into the basidia. Thus, there are diverse patterns of nuclear behavior leading to the production of spores. Variations in these patterns might provide clues to phylogenetic relationships in Homobasidiomycetes, but they have been studied in too few species to make broad generalizations (Hibbett et al 1994a, Mueller and Ammirati 1993).

Although much attention in Homobasidiomycetes has been focused on fruiting bodies, the mycelium also forms other specialized multicellular structures. Examples include rootlike rhizomorphs, which enable Homobasidiomycetes to forage along the forest floor (Fig. 4), and sclerotia, which are resting structures from which fruiting bodies may be formed. 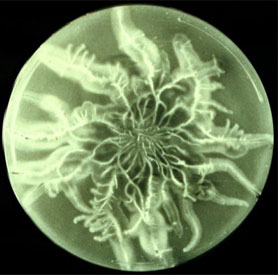 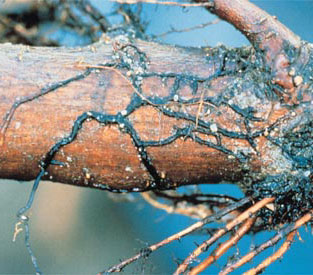 Figure 4. Rhizomorphs of Armillaria in culture (left; ? James B. Anderson; from the Mycological Society of America Slide Collection) and in nature (right; ? American Phytopathological Society; from the APS Education Center Illustrated Glossary). Images used with permission.

Mushrooms come in many shapes, including coralloid forms, bracket fungi, puffballs, and crustlike resupinate forms (Figs. 5-6). Gross morphology of fruiting bodies was the basis for the nineteenth-century classification of Homobasidiomycetes and other Fungi by Elias Fries (1874). The Friesian taxa are no longer regarded as natural entities, but these groupings remain useful for categorizing fruiting body forms and they are emphasized in many useful field guides (e.g., Barron 1999; Bessette et al. 1997; Phillips 1991). Fries made a basic distinction between those fungi that produce their spores internally, which he called Gasteromycetes, and those that produce their spores externally, which he called Hymenomycetes (not to be confused with the modern use of the term, which refers to the clade that includes Homobasidiomycetes, jelly fungi, and certain basidiomycetous yeasts). Gasteroid forms are now understood to have evolved repeatedly from hymenomycetes (note the lower-case "h" indicating that this is a descriptive term referring to mushrooms with external spore-bearing structures rather than the clade Hymenomycetes; Bruns et al. 1989; Hibbett and Thorn 2001; Hibbett et al. 1997). The most common gasteroid forms are puffballs (Fig. 5) and false-truffles (tuberlike fruiting bodies that are formed underground). Puffballs and false truffles have evolved independently in multiple clades of Homobasidiomycetes. Uniquely-evolved gasteroid forms include bird's nest fungi, stinkhorns, earthstars (see the title illustration), and the "cannon-ball fungus", Sphaerobolus stellatus (Brodie 1975, Coker and Couch 1928, Miller and Miller 1988).

In some hymenomycetes, the hymenium is initially formed inside the fruiting body, but later becomes exposed as the cap expands (Fig. 5). It has been suggested that a developmental arrest in such forms could lead to the evolution of gasteroid forms (Bruns et al 1989; Hibbett et al. 1994b, Thiers 1984). 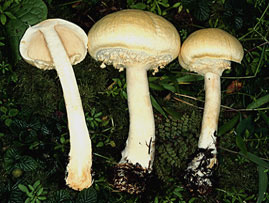 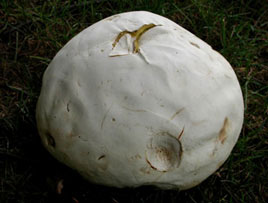 Figure 5. The hymenium in the hymenomycete Agaricus (left, ? D. Hibbett) is initially concealed by veils. Several groups of puffballs, including the giant puffball Calvatia (right, ? M. Binder), are closely related to Agaricus and may have been derived by paedomorphosis.

Strong support for most of the clades proposed by Hibbett and Thorn (2001) was obtained by Binder and Hibbett (2002) in an analysis that combined data from small and large subunits of nuclear and mitochondrial rDNA (3.8 kilobases per species) in 93 species that span much of the diversity of Homobasidiomycetes. In recent years, several additional clades have been detected (Hibbett and Binder 2001; Larsson 2002; Lim 2001; Langer 2002). It now appears that there are at least twelve or thirteen mutually exclusive clades in the Homobasidiomycetes, as indicated in the tree at the beginning of this page.

Relationships among the major clades of Homobasidiomycetes are generally not well resolved. The four-region analysis by Binder and Hibbett (2002) found strong support (bootstrap=90-94%) for a sister-group relationship among the bolete clade and euagarics clade. However, an analysis of nuclear large subunit rDNA sequences by Wei? and Oberwinkler (2001) suggested that the euagarics clade and the russuloid clade are sister groups (bootstrap=83%).

The polyporoid clade is one of the most problematical groups in the homobasidiomycetes. It has been resolved as a monophyletic group in several analyses (Hibbett et al 1997; Hibbett and Binder 2002; Binder and Hibbett 2002), but it has never received strong bootstrap support. An analysis by Larsson (2002) suggested that the polyporoid clade, as delimited here, is diphyletic.

The cantharelloid clade is also controversial. Some analyses (Hibbett and Binder 2002) suggest that the Ceratobasidiales, Tulasnellales, and Sebacinaceae pro parte are nested within the cantharelloid clade. However, as noted above, the basidia of these taxa are very different from those of other Homobasidiomycetes. In addition, analyses by Wei? and Oberwinkler (2001) suggest that the Ceratobasidiales, Tulasnellales, and Sebacinaceae are outside of the Homobasidiomycetes (see the Hymenomycetes page for further discussion).

In summary, twelve or thirteen mutually exclusive clades have been detected in the Homobasidiomycetes through analyses of rDNA sequences. Except for the polyporoid clade, all of these groups have been strongly supported in at least one published analysis. Major controversies concern the monophyly of the polyporoid clade, and the limits of the cantharelloid clade. Relationships among the clades are poorly resolved, except for the sister-group relationship of the euagarics clade and bolete clade. The basal position of the cantharelloid clade and gomphoid-phalloid clade is consistent with their possession of imperforate parenthesomes, but this placement is weakly supported by currently available molecular evidence.

Hibbett DS, Tsuneda A, Murakami S (1994b) The secotioid form of Lentinus tigrinus: genetics and development of a fungal morphological innovation. Am J Bot 81:466-478.

Miller, O. K., Jr. 1971. The relationship of cultural characters to the taxonomy of the agarics In: Petersen RH (ed) Evolution in the higher basidiomycetes. University of Tennessee Press, Knoxville, pp 197-216.

Raper, J. R. and Flexer, A. S. 1971. Mating systems and evolution of the basidiomycetes. In: Petersen RH (ed) Evolution in the Higher Basidiomycetes. University of Tennessee Press, Knoxville, pp 149-168.

Rayner, A. D. M. and Boddy, L. 1988. Fungal decomposition of wood: its biology and ecology. John Wiley and Sons, Chichester.

Development of this page was facilitated by the "Deep Hypha" Research Coordination Network and the "Assembling the Fungal Tree of Life" project (NSF awards DEB-0090301 and DEB-0228657). Many thanks to Jim Anderson, Manfred Binder, Darrel Hensley, Taylor Lockwood, Mike Wood, the American Phytopathological Society, and the Mycological Society of America for permission to reproduce the images in Figs. 1-7, and Dan Dvorak for helpful comments.

Correspondence regarding this page should be directed to David S. Hibbett at