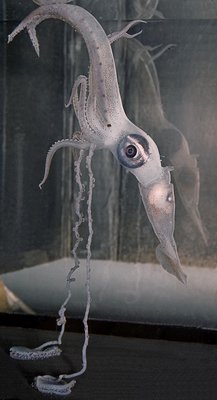 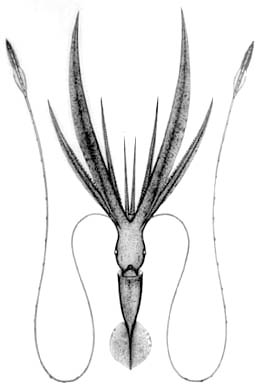 The holotype was deposited in the Museum of Natural History, Nice, France, but it is no longer extant.
Containing group: Chiroteuthis

C. veranyi is the type species of the genus. It has a rich and varied history (see Nomenclature), based in part on its description in an era when few systematic characters were recognized and these were poorly defined, and in part because of the unusual, large paralarval stage that typifies the family. This species has a broad distributional range and future studies may show that this is a complex of closely-related species rather than the single species presently recognized.

The title photograph shows a squid in an aquarium with the ventral arms uppermost. This is reversed from what has been seen in situ from submersibles (i.e., an oblique attitude with arms up but with the dorsal arms uppermost).

More details of the description of C. veranyi can be found here.

The appearance of the visceral photophores are very different from those of C. spoeli (see Life History on the Chiroteuthis page). In C. veranyi the photophores are more imbedded in the ink sac and seem to have a different internal structure.

This species was originally described as Loligopsis veranyi by Ferussac in 1835 for a specimen from the Mediterranean Sea. The genus Chiroteuthis was erected for this species by Orbigny in 1841 [In Ferussac and Orbigny, 1834-1848]. This remained the sole species in the genus until 1881 when Verrill described Chiroteuthis lacertosa from the western Atlantic Ocean off Nova Scotia, followed shortly thereafter by his Leptoteuthis diaphana in 1884, a juvenile from off New Jersey, western Atlantic.

Although Ficalbi (1899) asserted that Doratopsis vermicularis Rochebrune, 1884 was the larval form and synonym of Chiroteuthis veranyi, this relationship was not generally accepted until confirmed by Naef (1923). Naef also indicated that Verrill's Leptoteuthis diaphana was a transitional stage between the doratopsis and subadult of C. lacertosa.

Pfeffer (1912) recognized two subspecies, C. veranyi veranyi, from the Mediterranean and eastern Atlantic and C. veranyi lacertosa from the western Atlantic from Nova Scotia to the Caribbean region. Nesis (1982/87) concurred with the subspecific designations and expanded the known geographical distribution of C.veranyi veranyi to include southern subtropical areas of the Indian and Pacific Oceans. We find no differences between C. veranyi and C. lacertosa at the specific or subspecific levels. C. veranyi, however, is a broadly distributed species that exhibits considerable geographic variation over its range. See Naef(1923) for complete synonomy.

The holotype of C. lacertosa (= synonym) is deposited in the National Museum of Natural History in Washington. It is in its original poor condition, with tentacles lacking, as when originally described.

The early life-history stages have been described by Ficalbi, Verrill and Naef. Nevertheless, separation of doratopsis stages from co-occurring species has not been achieved. Little else is known of the life history of C. veranyi.

C. veranyi is found throughout most of the Atlantic and the southern subtropical areas of the Indian, and Pacific Ocean (Nesis, 1987).

Figure. Distribution map of C. veranyi based only on capture data from specimens present in the collections of the U. S. National Museum of Natural History. Map by R. Young.

Little is known about the vertical distribution of this species. Roper and Young (1975) report a single record of a subadult taken at a depth of 400 m in the Mediterranean at night.

Verrill, A.E. 1881. The cephalopods of the north-eastern coast of America. Part II. The smaller cephalopods, including the “squids” and the octopi, with other allied forms. Trans. Connecticut Acad. Sciences, 5: 259-446.

Verrill, A.E. 1884. Second catalogue of the Mollusca, recently added to the fauna of the New England coast and the adjacent parts of the Atlantic, consisting mostly of deep-sea species, with notes on others previously recorded. Trans. connecticut Academy Scineces, 6: 133-294.