This genus contains the following 12 species: 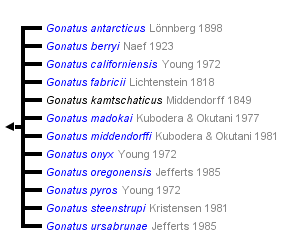 Gonatus, the most speciose genus in the family, has its highest diversity in the high North Pacific. These squids reach a maximum length of 39 cm ML.

Many of the species characteristics are found on the tentacles. The tentacles are complex and for descriptive purposes the club and stalk are divided into various zones, regions and series as follows:

Figure. Oral view of the club and distal stalk of G. californiensis showing the terminology (much of it color coded) used in describing the tentacle. Drawing modified from Young (1972).

The following table compares some characteristics of subadult species of Gonatus. The most useful character states are indicated in bold-red. The table doesn't separate all species.

*Known only from juveniles but with distinctive relative sucker sizes on arms and club dactylus. 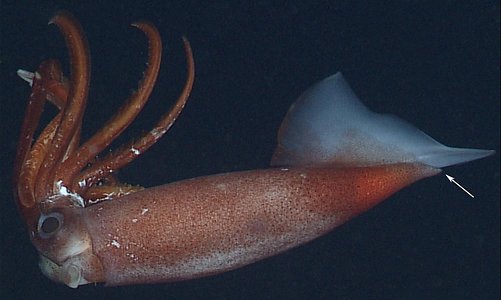 
Brooding of egg masses in G. onyx (Seibel et al., 2000) [suspected in G. fabricii (Bjorke et al., 1997)] occurs in deep water. Such brooding behavior, rare in oceanic squids, may prove to be characteristic of all members of the genus and perhaps the entire family. The long brooding period demanded by cold temperatures in deep water and its resulting slow population turnover rate, presumably is offset, in evolutionary time, by low egg mortality in the vast, dark, lowly populated bathypelagic environment (see Seibel, et al., 2000). For more information on brooding behavior, go to the G. onyx page.

Page: Tree of Life Gonatus Gray, 1849. Authored by Tsunemi Kubodera, F. G. Hochberg, Richard E. Young, and Michael Vecchione. The TEXT of this page is licensed under the Creative Commons Attribution-NonCommercial License - Version 3.0. Note that images and other media featured on this page are each governed by their own license, and they may or may not be available for reuse. Click on an image or a media link to access the media data window, which provides the relevant licensing information. For the general terms and conditions of ToL material reuse and redistribution, please see the Tree of Life Copyright Policies.