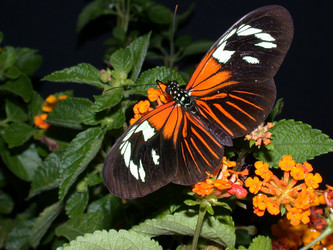 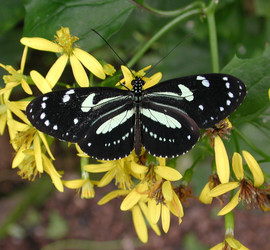 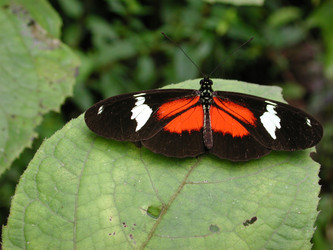 The Heliconius butterflies are the most speciose genus within the Heliconiini, displaying a dramatic diversity of colour patterns at species and sub-species level. They are also famous for Müllerian mimicry, with many species converging on a common wing pattern where they live together. Heliconius communities commonly consist of several ‘mimicry rings’, groups of species that share a common pattern.

Heliconius butterflies have two unique, derived ecological traits that may have facilitated rapid adaptive radiation: pollen feeding and pupal-mating behaviour (Gilbert, 1972). Adult butterflies systematically collect pollen from flowers, which they masticate on the proboscis to dissolve out amino acids. This allows adults to have a greatly extended lifespan – up to 8 months – in the wild. This long lifespan has led to a series of adaptations to exploit scarce resources in their rainforest habitats. Notably, trap lining behaviour, in which adults regularly follow the same route through the forest and visit known resource sites (Ehrlich and Gilbert, 1973). Adults also have a good memory and avoid returning to sites where they have been netted for a few days (Mallet et al., 1987). One clade within the genus, the H. erato and H. sapho groups show pupal-mating behaviour in which males locate female pupae and visit them regularly, eventually mating with females as or even before they emerge from the pupa (Deinert et al., 1994). 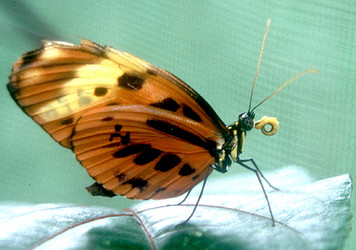 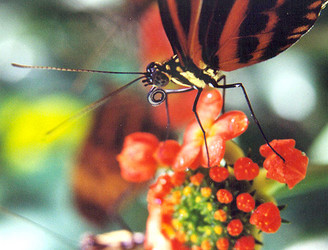 For discussion of the monophyly of the genus as presented here and relationships among heliconiine genera, see the Heliconiini page.  Within Heliconius the relationships presented here are based on molecular sequence data for 3 mtDNA and 4 nuclear gene regions (Beltran et al. 2007). There is also a highly supported monophyletic ‘pupal-mating clade’ suggesting that pupal mating behaviour evolved only once in the Heliconiina (see tree above).  Within Heliconius, the absence of a signum on the female bursa copulatrix is a character that defines the pupal-mating group (Penz, 1999).

Heliconius butterflies show a continuum of geographic divergence and speciation; they are unpalatable and exhibit inter- and intraspecific diversification of colour and patterns. Bates’ classic paper (Bates, 1862), reflecting observations during his stay in the Amazon, showed a geographical pattern for the different colour forms: similar between species within any one area of the Amazon basin, but the mimetic colour patterns themselves changed every 100-200 miles. Beside this geographic divergence, closely related species within an area often belonged to mimicry “rings” (groups of unpalatable species, together with some palatable species, that have converged on the same warning colour pattern) (Mallet and Gilbert, 1995). Bates’ system has all the intermediate stages between local varieties, geographic races, and sympatric species that make it an excellent biological model to study selection at the species boundary. See maps attached to each species.

Co-mimetic species such as H. erato (top) and H. melpomene (bottom) have frequently evolved a diversity of geographic races or sub-species.  The two species look identical in any one locality but their patterns change in concert across their geographic range; Localities left to right: Zamora, Puyo, Tarapoto, Guayaquil, Yurimaguas.; Image © 1999 James Mallet

Gilbert LE. 1972. Pollen Feeding and Reproductive Biology of Heliconius Butterflies. Proceedings of the National Academy of Sciences of the United States of America 69: 1403-1407.

Correspondence regarding this page should be directed to Margarita Beltran at , Andrew V. Z. Brower at , and Chris Jiggins at