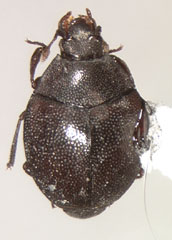 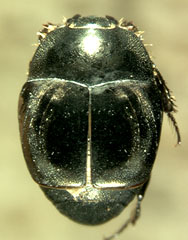 The Hydrophiloidea is a moderately large superfamily, containing about 6500 species distributed throughout the world (Hansen, 1991; Newton, 1991; Mazur, 1997). They are very diverse in habits. Approximately one-fourth of the superfamily is strictly aquatic, as larvae and adults, while the remainder is terrestrial. The larvae of virtually all known species are predaceous, and approximately two-thirds of the species are also predaceous as adults. But adults of most Hydrophilidae and Sphaeritidae are saprophagous.

Adult Hydrophiloidea are very diverse in body form. The one essentially constant character is the terminal 3 (rarely 5) segments of the antennae forming a distinct, pubescent club. The segment preceding this club is also usually cup-like. The group is more easily characterized by their larvae. Most Hydrophiloid larvae have desclerotized abdomens and articulated urogomphi; they are prognathous, with generally falcate mandibles (lacking molar region), and they have the labrum (and clypeus) indistinguishably fused to the head capsule forming a toothed "nasale."

The monophyly of Hydrophiloidea is generally accepted (Lawrence & Newton, 1982, 1995), although not entirely uncontroversial. Characters supporting hydrophiloid monophyly are most apparent in the larval stages. Of the characters listed above, prognathy and the modifications of the clypeolabral region (fusion of these scelerites to the frons) are apparent synapomorphies. Additional possible synapomorphies include the form of the antennae and maxillary palpus. However, adult synapmorphies are somewhat more obscure. Hansen (1997) cites three possible characters: atrophied spiracles of abdominal segment 7, male tergite 9 with a sclerotized dorsal bridge, and head with fimbriate epistomal lobe. An old, largely dead, controversy placed Hydraenidae as the sister group to Hydrophilidae, rather than in the Staphylinoidea. The two groups both have aquatic adults, and share numerous characteristics related to this habit. But larvae of Hydraenidae have little in common with those of Hydrophilidae, and this question is considered settled. Recently, some molecular data have suggested some unconventional relationships, placing the Hydrophilidae within Scarabaeoidea (Hawks, unpublished). However, these data are still being analyzed (Hawks, pers. comm.), so it is impossible to evaluate this suggestion.

There is no question about the monophyly of each the four families recognized here. Hydrophilidae is frequently divided into as many as 6 families (e.g. Hansen, 1991), but these are treated as subfamilies here. Relationships among the families of Hydrophiloidea have not received tremendous attention, but the relationships presented here have been long suspected, and have recently found support by morphology (Hansen, 1997) and molecules (Caterino & Vogler, in press).

The monophyly of Sphaeritidae + Synteliidae + Histeridae is supported by several characters, including truncate elytra, compact antennal club of the adults, complete invagination of abdominal segment 8 into the abdomen, scooplike coxites of the ovipositor, lack of stemmata in the larvae, and numerous other features (see also Hansen, 1997; Lawrence and Newton, 1982; Newton, 1991; Slipinski & Mazur, 1999; Caterino & Vogler, in press). Ecology is also entirely consistent with these relationships. Like Hydrophilidae, Sphaeritidae is known to be saprophagous in the adult stage (Nikitsky, 1976; Löbl, 1996; Newton, 2001), while Synteliidae and Histeridae have become primarily predaceous in all life stages (Mamayev, 1974; Newton, 1991). The sister group relationship between Synteliidae and Histeridae is also supported by several morphological characters including concealment of the protrochanters (adults), sclerotization of the abdominal tergites from at least tergite 4 and back, and loss of the cardo of the larval maxilla (Ohara, 1995; Hansen, 1997; Slipinski and Mazur, 1999).

Caterino, M. S. and A. P. Vogler. in press. The phylogeny of the Histeroidea. Cladistics.

Beutel, R. G. 1994. Phylogenetic analysis of Hydrophiloidea based on characters of the head of adults and larvae. Koleopterologische Rundschau 64: 103-131.

Hansen, M. 1991. The hydrophiloid beetles. Phylogeny, classification and a revision of the genera. Biologiske Skrifter 40: 1-368.

Mamayev, B. M. 1974. The immature stages of the beetle Syntelia histeroides Lewis in comparison with certain Histeridae. Entomological Review 53: 98-101.

Nikitsky, N. B. 1976b. On the morphology of a larva Sphaerites glabratus and the phylogeny of Histeroidea. Zoologicheskii Zhurnal 55: 531-537.

Correspondence regarding this page should be directed to Michael S. Caterino at