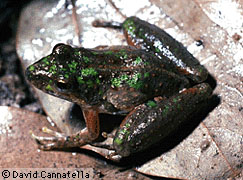 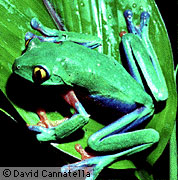 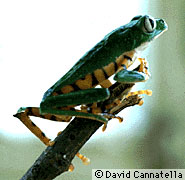 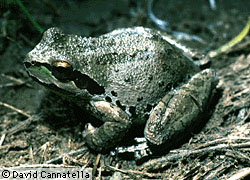 Hylids (treefrogs) are one of the largest families of frogs. There are about 37-39 genera. These are arranged in four subfamilies, the first three of which are distinctive: Pelodryadinae, Phyllomedusinae, Hemiphractinae, and Hylinae.

Pelodryadinae--these are the Australian treefrogs, Nyctimystes, Litoria, and Cyclorana. Some Cyclorana are completely terrestrial, and lack the expanded toepads that are typical of most hylids. Pelodryadines also occur in New Guinea and adjacent islands. Some Miocene and Pliocene fossils are known.

Phyllomedusinae--these are the Leaf Frogs. This lineage occurs from Mexico through tropical South America. The best known representative, and one of the best known of all frogs, is the red-eyed treefrog of Central America. Leaffrogs generally deposit their eggs on vegetation near ponds and the hatchling tadpoles fall into the water; one genus has highly stream-adapted tadpoles with funnel-mouths. In general, the phyllomedusine tadpoles are very specialized filter-feeders and generally hover in schools in the upper part of the water column. Some phyllomedusines live in desert areas, and their skin secretes lipids that form a waterproof barrier to prevent dessication. Although most are highly arboreal, there is one species that seems to be terrestrial. No fossils are known.

Hemiphractinae--these frogs care for the developing eggs by carrying them on their back in a shallow basin or in pouches modified from the skin. The developing embryos hatch as froglets in some species or as tadpoles in others. One species, Gastrotheca guentheri (formerly called Amphignathodon), is the only species of frog with teeth on the lower jaw. A distinctive genus is Hemiphractus, which has bony horns that are posterior extensions of the skull bones. Hemiphractines are found in South America and Panama, from lower tropical forests up to well above treeline in the Andes. There are no known fossils.

Hylinae--The remainder of the tree frogs are placed in the Hylinae. This is a diverse group of frogs, placed in this group largely because they do not possess the distinctive features of the other subfamilies. Hylines include all of the hylid frogs in the United States. In addition to Hyla, Pseudacris, Acris, Limnaoedus, Pternohyla, Osteopilus, and Smilisca are found in the United States. Most of the species of hylids occur in North, Central, and South America, including the Antilles. Only the genus Hyla is found outside of the Americas, in Europe, Asia, and Africa north of the Sahara. Fossils are known as far back as the Oligocene.

Among the most bizarre hyline frogs are certain casque-headed genera, such as Triprion and Trachycephalus, in which the skull bones are elaborated into a solid helmet. Certain casque-headed species use their bony heads to block the entrances to their burrows and reduce evaporative water loss.

The distribution of living members of the family Hylidae is indicated in red.

The name Hylidae was defined by Ford and Cannatella (1993) as node-based name for the most recent ancestor of Hemiphractinae, Phyllomedusinae, Pelodryadinae, and Hylinae, and all of its descendants. The single synapomorphy known is claw-shaped terminal phalanges; these are also found in some hyperoliids (see below). Another commonly mentioned diagnostic feature of hylids is the presence of intercalary elements, but these are also present in centrolenids and pseudids, among the non-ranoid neobatrachians (see below). Savage (1973), Laurent (1979, 1986) and Dubois (1983, 1984) recognized the Australian hylids (Pelodryadinae) as a distinct family.